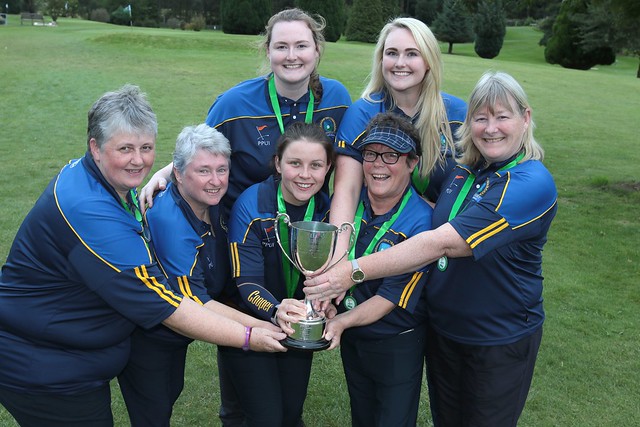 As the Ladies teams of Louth and Waterford have the honour of getting the first National Inter-County in three years underway in Rocklodge this Saturday, Communications & Press Officer Jason O’Connor takes a look at a more streamlined National Ladies Inter-County this year as the battle for the James Vaughan Cup returns.

Amidst of the things we have missed and forgotten over the last two years (2020 and 2021) it’s easy to forget that the last staging of this event came down to the very last hole in McDonagh back in 2019. Martha O’Brien rolled in a putt that meant Tipperary would win on sixth card from Dublin as it now only three years later that the Premier County get to defend the title.

The teams may be smaller with the decision to reduce it to four players from six but it might well make it even more competitive as every shot will count you sense. Teams have already had experience of playing as four with the provincial Inter-Counties having been played the same way with Tipperary winning in Munster and Dublin winning in Leinster. Tipp are represented by four of their winning side from three years ago in Breda White, Mary Quinn, Shula and Gemma McCarthy as they will find themselves mixed in with Kildare and Dublin for the Scotch Foursomes pairings.

Dublin are represented by the silver and bronze medallists from the National Senior Ladies Strokeplay in Fermoy back in June as Glenda Hoey and Ger Ward return to Cork looking for more honours. Cork had to make do with the Nett prize when this event was last held but will definitely want to do a lot better this time on home turf. Mary Murray and Paula Nolan from the host county will lead their challenge as Fermoy duo Sarah McGrath (National Matchplay runner-up) and Ailish Sexton make up their quartet.

Louth will be their playing partners on Saturday as Seapoint trio Marlo Everitt, Noelene Bedford and Mary Coyle along with Collon’s Mary Agnew make up their team this year. Kildare are represented by Ryston and the Byrne sisters make up half their team. Chrissie Sheedy (winner of the National Senior Ladies Strokeplay in Fermoy) and Marian Courtney will be joined by Tara Dillon and Mary Donnelly as they bid to improve on their second place finish at the Leinsters.

Waterford make a very welcome return to this event after recently competing at the Munsters while Meath will want to build on a third place finish in their provincial event. Yvonne Quinn, Paula Lynch, Ursula Dowd and Margaret Reilly make up their side as in total seven teams will take part in this year’s event.

A reminder it is 36 holes of Scotch Foursomes for the Ladies on Saturday followed by a closing 18 holes of Singles on Sunday. Less players should make the margins tighter but whether it changes the order of results is hard to say in advance. It will be great to see everyone back out in their county colours again at national level and hopefully we get a finish similar to 2019 in kick starting it all again.

Tomorrow: We preview the Mens event in Rocklodge