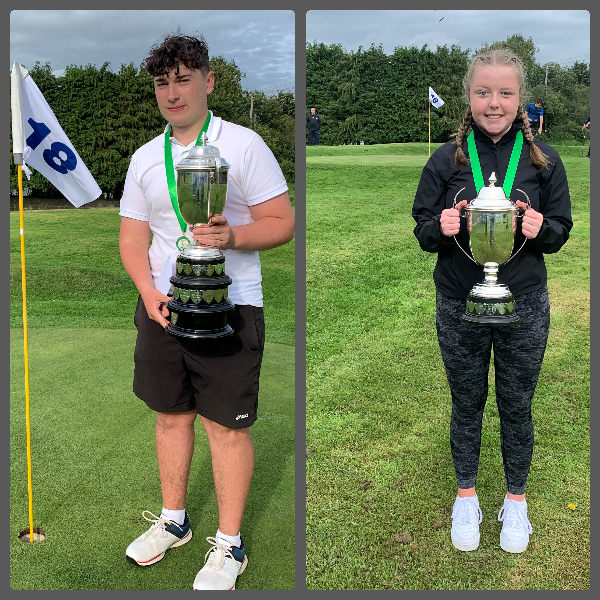 The 2020 National U-16 Strokeplay Championships were played in sunny, if breezy, conditions at the wonderfully-prepared Athgarvan course on Saturday John Manning reports on the event here.

Lucan’s Eimear Ahern has been runner-up for the last two years but made no mistake today with an assured performance that saw her crowned National Girls’ Strokeplay Champion for 2020.

Eimear, who was runner-up to Sophie Farnan (Skryne) at Fermoy in 2018 and lost a play-off to the Co. Meath player at Glenville last year, posted an opening round of 61 at Athgarvan to move into a six-stroke halfway lead over Tralee’s Ella Moynihan.

Eimear matched Ella Moynihan’s second round of 68 to maintain her six-stroke cushion. The Lucan girl’s two-round total of 129 gave the Dublin competitor a notable double. Having defeated Ella in the All Ireland Matchplay decider at Hillview last month, Eimear is the first player in history to win the National Girls’ Strokeplay and Matchplay Championship titles in the same season.

Grace Reilly (Trim) improved 13 strokes on her opening round to card a second eighteen of 65 and claim the bronze medal with a 36-hole aggregate of 143.

The 2020 Boys’ Strokeplay Championship at Athgarvan was a triumph for Jack Mullins from the Kilbeggan club in Co. Westmeath, who was second at Fermoy in 2018. Trailing by a single stroke after his opening 53, Jack fashioned a fabulous 48 second round (the low single round of the championship) to post a 101 total, which clinched a two shot winning margin.

Semi-finalist in the recent National Matchplay Championship at Hillview, Jack Mullins is the first Westmeath winner of the National Boys’ Strokeplay Championship since Kevin Metcalfe (Rochfortbridge) was victorious at Waterford Crystal in 2001.

Kerry U16 Matchplay Runner-Up Fintan Martin of the Deerpark club in Killarney took second place on five under par. Fintan scored a 52 first round at Athgarvan to lead by one after eighteen holes from Jack Mullins and Dylan Hudson (St. Patrick’s). The Kerry player recorded a 51 second eighteen for a 36-hole aggregate of 103 and a one stroke cushion over Dylan Hudson.

Fintan Martin helped Kerry to the All-Ireland Under-16 Inter-County championship at Fermoy two years ago. The Kerry County U16 Matchplay Plate winner in 2019 held the Athgarvan clubhouse leader for quite a while before Jack Mullins posted his 101 in one of the final groups.

2017 Leinster Matchplay Champion at Gowran and 2019 Leinster Strokeplay (14-15) Champion at Rochfortbridge, Wexford’s Dylan Hudson represented Ireland in the 2018 International Challenge at Seapoint. With his 51 second eighteen for 104 at Athgarvan to take the bronze medal, Dylan adds a third slot in National Boys Strokeplay to his fourth place finish at Glenville last year. He was also runner-up to Liam McGrath (Douglas) at Hillview in the National Boys Matchplay championship.

Two solid rounds of 55 and 53 for a level par tally of 108 claimed the Best Age 10-13 category prize for Oldcastle’s Mark Cadden. That puts Mark in elite company as the previous Co. Meath representative to win that award was Evan Carry (Castletown) in 2014.

Jack Mullins is the first Westmeath winner of the National Boys’ Strokeplay Championship since Kevin Metcalfe (Rochfortbridge) was victorious at Waterford Crystal in 2001. The winning score (101) in the Boys Championship was exactly the same as Kieran Kearney scored to win on the last occasion the event was played at Athgarvan back in 1982.

Fintan Martin of the Deerpark club in Killarney replicated the second place achieved by his brother Lorcan at Royal Meath in 2016. Similarly, Fintan Martin’s runner-up tally of 103 in 2020 at Athgarvan matched Tristan O’Dowd’s five under par silver medal winning total in 1982.

101 has now been the Boys’ Strokeplay Championship winning score on three occasions – Kieran Kearney (1982) and John O’Rourke (at Lakewood in 2006) being the others.

Jack Mullins becomes the second player in history to win the National Boys’ Strokeplay Championship having previously been runner-up. Shane Redmond won in 2010, was runner-up in 2011 before winning again in 2012. Chris O’Sullivan and Darren Quirke were both runners-up after they had previously won the Championship.