John Cahill of Fermoy became the new European Strokeplay Champion after an absorbing battle with his Cork Inter-County team-mate John Walsh (Collins) at the Central Park course in Dagenham over the weekend.

Cahill took command of the Championship with an opening round of 46 on Saturday morning and he led Walsh by two overnight when he signed for a 49 on Saturday afternoon. Playing together in the final group on Sunday, the Cork men traded birdies all through and although Walsh closed the gap to one and made a sensational par at the last after miss-hitting his tee-shot, Cahill calmly two-putted from four feet for par on the home green to claim the title.

Cahill, Irish Strokeplay Champion in 2001, posted an eighteen under par 54 hole aggregate of 144 while former World Strokeplay champion John Walsh scored 145 (49+48+48). Cahill maintains his impressive record in the European Strokeplay Championship for he was second to Liam O’Donovan (Bruff) at the previous staging at Orvelte, Holland in 2015. Liam O’Donovan scored 154 to make the Top 10 at Dagenham in his title defense.

2014 Irish Open winner Eamon Gibney (Castletown) fired a final round of 48 to pip Britain’s John Deeble for third place on the tiebreaker after the pair had finished locked together on 149. Denis O’Sullivan (Collins) and reigning Irish Strokeplay holder John Ross Crangle (Loughlinstown) were next on nine under par 153. 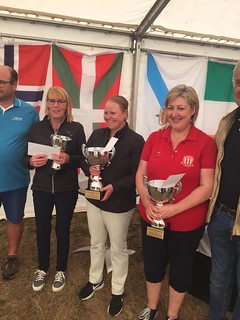 Esther de Schiffart (Netherlands) retained her European Ladies Strokeplay championship trophy with a devastating display, shooting rounds of 54, 51 and 50 for her imposing seven under par tally of 155. First round leader Liz Quinn of Collinstown registered a highly impressive second place performance. Liz utilized all her international experience with 18 hole rounds of 52, 58 and 53 for her 163 total.

There was more Irish success in the O-55’s category. Anto Kavanagh, a loyal supporter of tournaments home and abroad over the years, carded a superb 49 final round to claim the laurels by a single stroke from defending champion Pacelli Darcy (Bruff). After a pre-dawn alarm call to make his 07:54am First Round tee-time, Kavanagh played very competently for his 51 opener and trailed by three strokes overnight after a level par second round.

Darcy was consistency personified with scores of 52, 52 and 51 and that 51 earned him runners-up slot on the countback from Fermoy’s Barry Morrissey. Morrissey had held the joint lead after two rounds with Shandon’s Dennis Monaghan.