53 ENTRIES for this Sunday’s National Ladies Strokeplay Championships in Collins as Cork hosts the competition for the third time in five years. Communications & Press Officer Jason O’Connor takes a look at a more compacted event this year with 36 holes being played across all three grades. 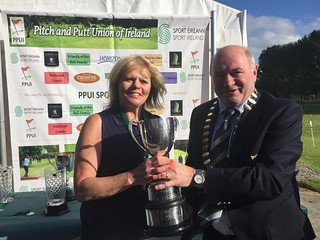 14 Ladies compete in this grade with just three entries from Leinster in the form of RGSC duo Susan Ritchie and Miriam Salmon along with McBride’s Audrey Donnelly. Liz Forde will bid to follow her sister Margaret in trying to win the title after the Riverdale player was victorious last year above in Cement.

National Ladies Nett Matchplay winner Elaine Quinn was second in the Munster Junior Ladies Strokeplay in Lakeside two weeks ago as her club-mate Sive Shelley won the grade with third place finisher Tralee’s Lisa O’Connor also amongst the field for Sunday. Local hopes will rest with Nuala McNamara and Phil Downey for the host club with other Cork entrant in the field including Fermoy’s Michelle Flynn, Lakewood’s Valerie Leahy and St Stephens Georgina Harte. 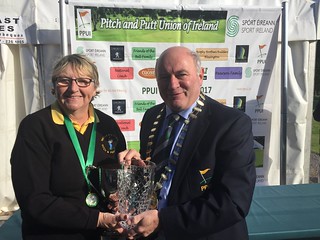 The grade with the most entries on Sunday (23) as both of the recent Provincial Strokeplay winners at the level are entered. Pauline Balfe of Old County was the winner of the Leinster Inter in Gowran while Lakeside’s Bridget Shelley was victorious in her home course at the Munsters two weeks ago. Sarah O’Neill was third in the Munsters herself and she is part of a four strong list of entries from the club which includes Nicola Ahern, Vera McCarthy and Patsy O’Donovan.

Some recent winners are also entered including 2014 winner Mary Donnelly of Ryston and 2015 winner Mary Quinn (who was second in the Munsters at Lakeside) with former Senior winner Rose Kelly of Ryston entered after coming third recently at the Leinsters. Ger Holland of RGSC reached her second National Matchplay Final in Tullamore last month as former National Junior Champion and third place finisher in this grade last year, Mairead Manning of St Stephens, is also entered for Sunday.

Other former winners of the National Junior Strokeplay included are last year’s winner Margaret Forde, Fermoy’s Ailish Sexton and Shandon’s Mary Fullam. Lucan’s Barbara Furlong, Rocklodge’s Paula Nolan and Hillview’s Pauline Lucey are other names to look out for a in a field that has the potential to be very competitive with the success some of the entrants have enjoyed at county, provincial and national level.

An interesting three-ball to start proceedings on Sunday as the Champions of the last two years are drawn together with defending champion Ger Ward and Tipperary Hills’ Breda White (2016 winner) teeing off alongside Helen Greagsbey of Fairview CY. Ger added the Leinster Strokeplay title to the retention of her National Matchplay crown in Tullamore as she looks for a county, provincial and national sweep of Strokeplay titles in Collins this Sunday.

Breda finished outside the prizes at the recent Munsters as Munster Strokeplay winner Mary Murray of Rocklodge follows next, playing alongside last year’s Intermediate Strokeplay Runner-Up Phil Condron of Lucan and 1995 winner Sheelagh Elmes of Portmarnock. Chrissie Byrne has been Runner-Up to Ger in recent stagings of the National Matchplay and Strokeplay events and whether she can get back to winning ways in a shorter format remains to be seen. Third place finisher at the Munsters Martha O’Brien of Lakeside and Siobhan Keely of RGSC are her playing partners on Sunday.

Local interest follows then as Collins’ Linda Murphy tees off alongside National Over 55’s Intermediate Strokeplay holder Maree O’Toole of Shandon and Glenda Hoey of RGSC. Siobhan Scannell returns to the competitive fray then, playing in a two ball alongside Fermoy’s Eleanor Walsh who recently finished as runner-up in the Munsters in Lakeside after winning the event for the previous two years. Ryston’s Tara Dillon had a good run to the Runner-Up spot in the Leinsters in Gowran and she will be one of the last players to tee-off alongside Fermoy’s Sarah Byrne.

The shortened format might be a factor along with the intense heat in the past week. Stamina might be as big a factor skill in determining the three winners in each grade on Sunday.

Best wishes and a safe journey to all those travelling to Collins this Sunday for the event. We will have updates and hopefully a few more features on social media from the day’s play.