THE fourth staging of the event, the Eamon Birchall Cup will be contested amongst six counties in the Gents B grade this weekend while six counties also will battle it out for the Ladies title. Communications & Press Officer Jason O’Connor takes a look at the sides in both sections in this preview. 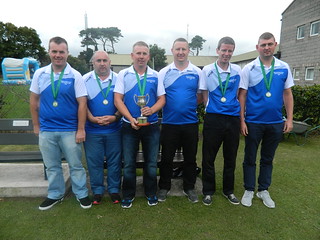 In the three stagings of the event so far it has been won by Munster counties, Clare the inaugural winners in 2014 in Tullamore before Waterford winning won the other two in Douglas in 2015 and retaining the title last year in RGSC. The Decies finished ahead of the Banner in the Munsters in Castleisland and feature Stephen Costello, Brian Farrell, Ian Flynn, Sean Hennebry, Eddie Hennessy and Daniel Sullivan amongst their side for this year. Clare meanwhile have Ger Hanrahan, Kenneth Kerin, Brian O’Flynn, Tim O’Sullivan, Niall Seery and Declan Sheedy amongst their ranks as they will bid to improve on their third place finish last year.

Longford were second behind Waterford last year by 13 strokes as despite not featuring in the Leinster Inter-Counties this year they will hope to challenge again as the Burkes of Anthony, Richard and Roy along with the Comiskey’s of Declan, Noel Snr and Noel Jnr make up their side for this weekend. Kilkenny enter as Leinster Junior Inter-County winners meanwhile. Nicholas Brennan, Derek Delaney, Aidan and Eugene Gibbons, Kevin Knox and Robert Middleton make up the Marble County side as it will be interesting to see how they fare at a higher level this weekend after their provincial success.

Carlow featured in the Leinsters at Intermediate and Junior level meanwhile but will hope to force their way into the medals this time with a line-up of Martin Baird, Kevin Halligan, Darren and Donal McNally, Mick O’Neill along with Patrick Robinson. Completing the field will be Monaghan, Bob Hillard, Ciaran McCreesh, Tadgh Meegan, Isaac Smith, Aidan and Michael Vaughan the Farney County’s line-up as they travel to Newbridge for the weekend.

Waterford look to be in a strong position ahead of their three-in-a-row bid for the Eamon Birchall Cup, whether the rest of the field can provide a sustained challenge to them remains to be seen in Ryston.

It’s a remarkable feature of the Ladies event that despite the generally low entry, no county has retained the event since 2008 going back the last of a four-in-a-row run of success for the Lilywhite County. On home turf this year they will be expected to be strong, not least for the fact five of their side are members of the Ryston club this year. Chrissie Byrne, Marian Courtney, Tara Dillon, Mary Donnelly, Margaret Keogh and Mairead O’Toole look to replicate their win in Tullamore three years ago alongside winning the Leinster title in Lough Owel last month.

Dublin are the defending champions from their own win on home turf in RGSC last year of course. After finishing 17 shots behind this weekend’s hosts in Lough Owel, the side of Sheelagh Elmes, Glenda Hoey, Ger Holland, Siobhan Keely, Maree O’Toole and Ger Ward will be anxious to retain their title but know it will be very difficult on the home patch of their great rivals. Cork have won the event three times this decade and appear best placed to oust either of the big two as Sarah Byrne, Vera McCarthy, Mary Murray, Linda Murphy, Patsy O’Donovan and Eleanor Walsh line out for the Rebelettes this year. They are lacking the benefit of a provincial run-out in Munster however as Tipperary are the only other side from the southern province entered.

Pauline Lucey, Martha O’Brien, Elaine and Mary Quinn, Frances Ryan and Bridget Shelley represent the Premier County this year as Offaly and Louth are the other counties entered for the Ladies event. Louth won the bronze medal at the Leinsters and have Mary Agnew, Noeleen Bedford, Christina Carroll, Marlo Everitt, Concepta Maddick and Ann Ward representing the county this weekend. Offaly will hope for a first medal since 2014 in Tullamore meanwhile as Deirdre Byrne, Linda Flanagan, Amy Galvin, Christine McCarthy, Lauren Pyke and Ger Ryan make up their side for this weekend.

Saturday is very much a team effort in the Ladies with Scotch Foursomes all the way through the 36 holes before the closing 18 hole Singles on Sunday. A home success will be expected but now much of a pressure or advantage it turns out to be will only be determined over the course of the weekend.

Tomorrow: We preview the battle for the Anchor Cup in Ryston.