In the second part of his Review of 2019, John Manning looks back to the National Strokeplay events for the Ladies and Gents which were both held in Kildare courses.

John Ross finally got his hands on the Donnelly Cup (the first Dublin player to do so since Anthony Malone at IGB 28 years ago) after three second place finishes in the Strokeplay with a three-round salvo of 49, 40 and 46 in Newbridge to beat Bryan Delaney (Bishopstown) by four strokes. JR’s second round 40 was the lowest single round ever recorded in National Gent’s Strokeplay championship finals.

His silver medal at Ryston added to his National Matchplay final defeat to Damien Fleming at Rocklodge means Bryan Delaney is the first player in history to be National Gents Matchplay and National Gents Strokeplay Runner-Up in the same year.

2013 Matchplay runner-up Sean Goggin recorded his best-ever performance in the National Gent’s Strokeplay, having finished fourth in 2007 and 2010. The McBride man fired 140 for third place. Ian Dillon (St. Bridgets) scored 141 to be the first Kildare player to finish fourth in the championship since Eddie Carey in 2001. Darren Quirke (Fermoy) clinched the newly inaugurated Best 36 Nett award on 91, 16 years since he claimed the 2003 National Boys Strokeplay and a dozen years on from his National Intermediate Strokeplay win.

Brian O’Flynn enjoyed a one stroke victory margin over John Farrell who was the first player from Bruff to finish Runner-Up in the National Gents’ Intermediate Strokeplay Championship. (Liam O’Donovan won the Championship in 1992).

Portmarnock’s David Poole finished third on 154, 25 years after he was runner-up in the senior equivalent and 34 years since he was crowned National Matchplay champion. Jason Long (Collins) added Best 36 Nett on 88 to his Runner-Up slot in the Munster Junior Strokeplay Championship.

Gowran's Derek Delaney fired a brilliant 151 at Ryston to become the first winner of the National Junior Gent's Strokeplay championship to represent a Kilkenny registered club. (Tony Walsh of Ashgrove won in 1990. The Ashgrove course was situated in Co Kilkenny but was affiliated in Waterford for Pitch and Putt purposes).

Derek’s seven stroke winning margin over Riverdale’s Sean Crowe was the highest in the National Junior Strokeplay championship since Noel Leahy won by 10 at Lakeside in Millennium Year. Sean Crowe’s consolation was not long in arriving as the Nenagh man helped Riverdale to All Ireland Inter-Club Handicap victory at Lakeside in October.

The Intermediate and Junior Championship winning scores were identical – the second time in history that has happened. On the previous occasion (at E.S.B. in 2002), the score was also 151.

Brian Dillon carded 159 to be the first member of Ardnacrusha to finish third in the National Gents Junior Strokeplay Championship. 36 Nett winner was Kevin Lambe (Athgarvan) with an impressive 84. 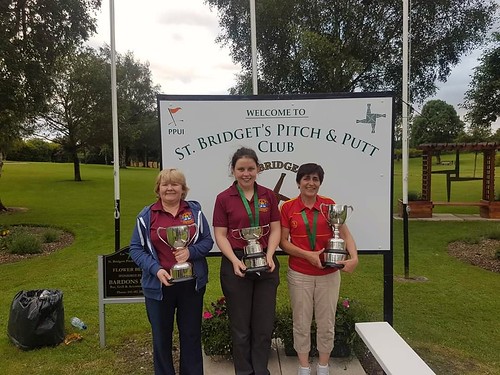 Martha O’Brien (Lakeside) won the National Ladies Strokeplay championship in a play-off with Chrissie Byrne (Ryston). Both players scored 23 over nine holes in the eighth play-off in championship history. It was the second successive play-off to require sudden death and Martha claimed the title on the first extra hole to become the fifth national girls’ champion (after Ann Ginnane, Marian Byrne, Bernadette Coffey and Tracey McGrath) to go on to be Senior Champion.

Tara Dillon (Ryston) settled for 155 to record her eighth top-three position in the championship – an event she has yet to win. Tara was third for the second successive year, for the third time in five stagings and for the fifth time in all. Shandon’s Maree O’Toole captured the newly created Nett award on 96, 36 years since she participated in a three way play-off for the overall championship at Lakewood in 1983. Marian Courtney (Ryston) celebrated the 20th anniversary of her National Strokeplay championship win by taking the Final 18 prize on 51.

Mary Ann Byrne’s 188 ensured she was the first player ever from the Fermoy club to finish third in the Championship. Fermoy has previously provided one winner and two runners-up in the event. Gemma Coyle’s 90 for Best 36 Nett meant she was the first Glenville club member to collect a prize at this Championship since Catherine Ankers was third at Ierne in 2012. Liz Forde’s 63 saw the Riverdale lady add the final 18 award in 2019 to third place in the 2017 National O-55 Junior Grade Strokeplay Championship.

Tomorrow: We conclude with a look back at the Strokeplay and O-55 events