Communications & Press Officer Jason O’Connor reports on today’s Provincial U-16 Matchplay Championships in both Leinster and Munster which saw a defending champion successfully retain his title and a previous runner-up go one better this time out. It was also a day that saw two all club encounters in the respective semi-finals in both provinces. 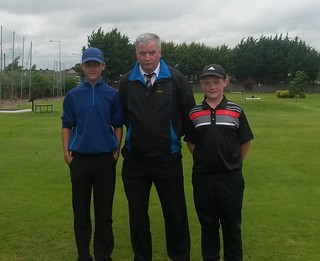 Evan Carry successfully retained the title he won last year in Ratoath with the Castletown player coming through all four of his matches by a minimum of four holes in each of his wins. Evan started off with a 5&4 win over Old County’s Craig Hennessy and he followed up with an 8&6 victory over Collinstown’s Nicholas Isdell to set up a meeting with another Old County player, Lennon Blake in the Semi-Finals. Evan won by 4&3 to make it back into the Final where his opponent would be Conor Cleere from the Gowran club in Kilkenny.

Conor defeated Old County’s Darragh Cullen in the Quarter-Finals by 4&3 and he followed up with a 6&5 victory over club-mate Nicholas Brennan in the semi-finals to ensure his place in the Final. Evan led 3up after the first 18 holes of the 36 hole decider and would eventually go on to win out by 5&4 to complete another provincial success for the Meath player. 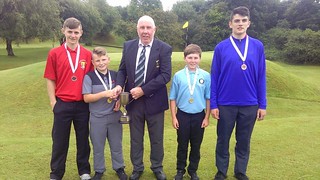 After losing out to his brother Ryan in the 2014 decider, Glenn Towler of St Annes made amends today in Deerpark as he held off the challenge of Cillian Courtney from the host club to win out by 4&3. Over the course of the two days Glenn overcame Deerpark duo Tom Cronin (6&4) and Darragh O’Callaghan (1up) along with Raffeen Creek’s Kevin Dullea (1up) in the Quarter-Finals to set up a Semi-Final Meeting this morning with another Cork player, Ballinlough’s Iain Aherne. Despite trailing by two early on, Glenn went ahead by two after the first 18 to take control of the match and a 4&2 victory ensured him of his place in the Final.

Cillian meanwhile had defeated club-mate Eoin O’Riordan Looney (6&5), St Annes’ Cian Murphy (2&1) and another club-mate in Robbie Harnett (8&7) to make it to this morning’s Semi-Finals where his opponent would be another Deerpark player, Lorcan Martin. Cillian was always in control of their semi-final and he claimed the second 8&7 win of his campaign to face Glenn in the Final. Glenn led by two for most of the First Round, an advantage he increased to four at one point but Cillian came back without one during the Second Round to keep the game in the balance.

Glenn regained his composure however to go back in control and record his eventual 4&3 victory.

Click on the attached Scoresheets to see how all matches in both provinces panned out:

Click on the attached links for photos from both events: