The Leinster U- 16 Matchplay was played in glorious sunshine at a testing but perfectly manicured Athgarvan course on Saturday.

Aaron Monaghan from Lucan was the inaugural winner of the event. The action took a while to get going following a few withdrawals but it came to life at the semi-final stage where Aaron defeated Christopher Woods (Bellewstown) 6 & 5. Earlier, Aaron had accounted for two other Meath lads, Jason Gibney (Navan) 3 & 2 and Sean Clerkin (also Bellewstown) 4 & 3.

A fourth Meath player of the day stood in the way, in the form of Castletown’s Evan Carry, winner of the Leinster Boys 10-13 grade earlier in the year. Evan had accounted for Bellewstown’s Lucas McKeen at the first extra hole and Cian Montgomery of Lucan, 3 & 2. The final itself was definitely the tie of the day. Aaron made most of the running, but was never more than two up at any stage. Evan bravely fought back each time, with two birdies, a massive putt on 16 and a chip in on 17, key to him taking the game to extra holes.

At the first sudden death hole, a firm chip from off the green lipped out on Evan. This allowed Aaron, who pitched wonderfully all day, to roll in a six foot putt for the victory. 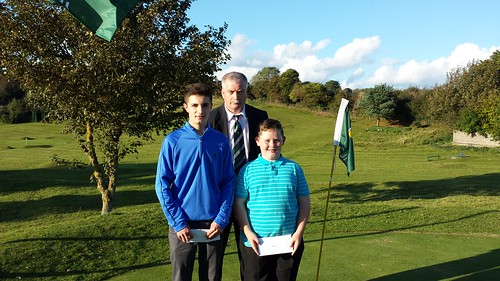 The first staging of this event in five years at St Stephens was dominated by Cork with Sunday’s two semi-finals consisting of two unique pairings, one a battle of brothers registered with different clubs, the other a battle of club-mates. Ryan (St Annes) and Glenn (St Stephens) Towler locked horns in a very competitive encounter, one that saw both players halve a hole in one! Ryan always seemed to hold the advantage in this encounter, turning a 2up lead after 18 holes into an eventual 4&3 victory.

The other semi-final between Douglas club-mates Cian Morrison and Conor Irwin was also of a high standard even if the final scoreline of 10&8 didn’t necessarily reflect that as Conor struggled to live with Cian’s accuracy in the match. The decider between Ryan and Cian ebbed and flowed both ways, Ryan taking a 1up lead after nine holes before Cian quickly responded to go 1up after 12 himself. Cian looked to be in the ascendancy with nine holes to go as he held a 2up lead but Ryan finished strongly by winning four of the last eight holes to go on and record a 2&1 win.

Ryan was crowned the first victor of this competition since 2009 and he became the first Cork winner of this event since 2007 when Chris O’Sullivan of Raffen Creek was victorious in Tralee.