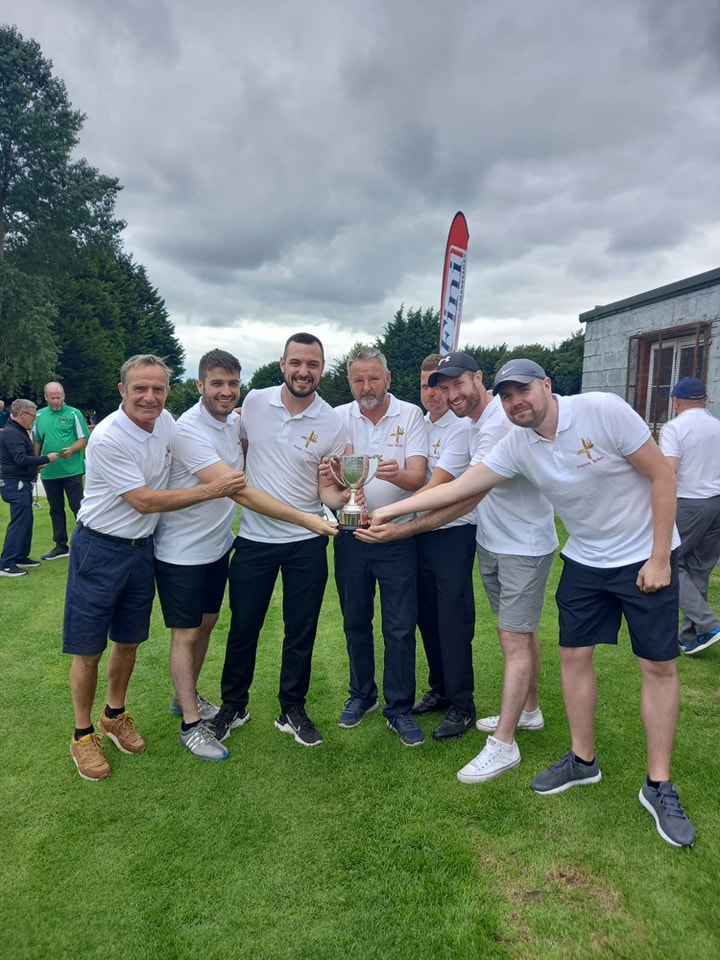 Gowran’s Jack McShane, who won that Leinster Boys’ Matchplay final, added the younger age provincial title (13 and under) with an excellent 104 at Seapoint. Jack enjoyed a nine stroke victory margin over Peadar O'Toole (Athgarvan) with Jack Courtney (Ryston) third on 118.

Sarah Cooney continued the family tradition of proud grandparents Oliver and Jean Cooney with a 36-hole aggregate of 115 at Seapoint to claim the Leinster Girls’ Strokeplay championship. Gemma Cuffe (Kilbeggan) took second slot on 128 with Molly O'Toole (Ryston) third on 130.

Dublin achieved the provincial senior championship double for the first time since 2018 and for the eighth time in all with a couple of impressive displays at Seapoint.

Dublin led Louth by one stroke after Foursomes play in the Gents Championship, 44 by Gary Healy and Chris Gallagher, trumping the 45 of Sean Goggin and George Beardsley as the other four pairs (two per side) signed for 46 apiece.

The Gents Intermediate championship at Killineer provided plenty of drama on Saturday.  Down swept into an early lead with an imperious eighteen under par performance in the foursomes. The Northerners led by four from Meath at that point with Kilkenny on -13. Westmeath and Wexford were tied in fourth spot on twelve under. The Lake County and the Model County were still deadlocked at the conclusion of the singles but had jumped to the top of the overall leaderboard on 472. Play-off! However, the Westmeath men had made their way off the course for their post-tournament meal. Back they came but victory went to Wexford over the extra holes. Diarmuid Cullen scored 48 for Wexford in singles and the Leinster Strokeplay champion was ably backed-up by

Irish Junior Strokeplay champion Glen Martin was the standout performer as Louth led the field a merry dance in the singles to claim the Junior Inter-County championship at Killineer on Saturday. Five behind Wexford at the halfway stage (-12 to -7), the host county were boosted by Martin’s fine 50 in singles. Anthony Butler contributed 52, Michael Leech 53, Adam Crosby and Stephen Behan were both round in 54 and John Conaghan shot 56. That added-up to a five under par haul of 319 for the individual round, which gave the Wee County 25 strokes to spare over Wexford (Thomas O'Brien, Glen Buckley, John Peare, David Franklin, Dale Kirwan, Lee Murphy) who scored 349 in singles. Carlow (Micko Salter, Sean Kelly, Keith McDonald, Padraic Nally, Ken Hickey and Martin Whelan) lifted bronze, just another stroke behind.

Due to a modest entry, the Intermediate and Junior ladies teams were combined for a single tournament, played under the Stableford format at Seapoint. A strong Meath quartet (Paula Lynch, Ursula Dowd, Margaret Conneely, Margaret Reilly) led by four after the first round and with every player accumulating at least 40 points on their own ball, the Royal County team tally of 260 points was good enough for a nineteen point winning margin over runners-up  Louth (Marlo Everitt, Ann Ward, Mary Coyle, Bridie Hanratty). The Kildare Junior Foursomes (Catherine Dillon, Ann Sweeney, Ann Williams and Marie Kett) scooped third place with 239.

Last Friday in Munster at Cunnigar produced drama as there was not just one but two playoffs for the Boys titles! The 14-15 category produced play of the highest quality. There was a two shot swing at the first extra hole as Adam O'Brien (Lakeside) birdied while his Deerpark opponent Nathan Cronin bogeyed. The pair were level at the second which Nathan aced while Adam parred. The Tipperary and Kerry players matched each other shot for shot from there to both stand on the ninth tee at three under par. Adam birdied the final hole to add the provincial title to his National Boys Matchplay Plate success last year. Adam produced 108 over the regulation 36-holes to finish level with Nathan who is the current National Boys Matchplay Plate champion. Nathan’s club-mate Noah Sexton scored 111 in third place.

The 8-13 at Cunnigar was also decided by the play-off route. All Ireland Boys’ Matchplay champion Joe Franklin (Hillview) defeated Jay Barrett (Listowel) in extra holes after they both returned 106 for two rounds. Jay shot a 50, the best eighteen of the championship, to force the play-off having trailed Joe by one stroke at halfway. Third was 2021 National Boys’ Matchplay semi-finalist Brian McCarthy (Deerpark) with 108.

Just as they did on home soil at Hillview three years ago, Tipperary ladies and senior gents supplied a provincial Inter-County double at Cunnigar.

Fermoy duo Robbie Donovan and Jimmy Quinn posted a brilliant 45 in the foursomes, which was superbly backed-up by JJ Quirke (Fermoy) and Cian Murphy (St. Annes) with 47 along with a 48 mustered by St. Anne’s pair Donal Duggan and Darren O’Leary. That left the Leesiders on 22 under par and one shy at that stage of host county Waterford (for whom Owen Turbert and John O'Shea fired a scintillating 44).

Inspired by Jimmy Quinn who conjured up an excellent 48, Cork cut loose in the singles to tally 16 under par overall for a final aggregate of 448, which saw them run out winners by 14 strokes over runners-up Waterford (John O'Shea, Stephen Donovan, Aidan O'Rourke, Keith Power, Ronan Hogan, Owen Turbert).

Limerick won the Munster Junior Inter-County title for the second time in three stagings. Ralph Fitzgerald, Rick Harty, Mick O'Donnell, Peadar McCarthy, Shaun Donegan and Kieran Donegan dominated the championship from the off with a -13 total for the foursomes, a 47 by Ralph Fitzgerald and Shaun Donegan being particularly impressive. Six clear of Kerry at halfway, the Treaty men eased to a twelve stroke win over Tipperary. Ralph Fitzgerald and Rick Harty dipping under the card with matching 53’s as Limerick posted a cumulative 490. Ger Tuite and Michael O'Donoghue shot 49 in foursomes for Tipperary while Francis Sage, Tommy Kiely, John Hogan and Sean O’Connor scored solidly in singles.