AFTER their respective wins in Seapoint on the June Bank Holiday Monday, Communications & Press Officer Jason O’Connor spoke to both Shane Murphy (Gents) and Ger Ward (Ladies) on their respective National Matchplay successes at the Termonfeckin venue. 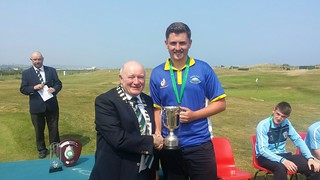 IT’S hard not to assess this breakthrough triumph for the Raffeen Creek player and not think back 12 months previously to the 2015 event in Lakeside. Shane led reigning champion John Walsh 3up with 6 holes to play in the Last 16 only for Walsh to pull the game out of the fire and emerge victorious on the way to a successful title defence. He openly admitted that it was something that gave him a lot of drive going forward from Templemore. “Definitely I felt more driven to succeed after that and I’m just thankful that I have got to where I have today with some great people around me both in my family and the club as well,” the newest winner of the Day Cup said.

A second place finish in the Catalan Open back in April might have given him a good platform in the calendar year but Pitch & Putt all began for Shane at the age of 10. “My dad being a golfer encouraged us to take up the game and I started playing it with my brothers and it all took off from there,” he said about starting out in the game. The start of this decade brought with it some good success, a member of the 2010 National U-16 Inter-County winning team with Cork in Westmeath’s Kilbeggan, Shane followed up a year later in his first year as an adult player by winning the National Intermediate Strokeplay in Douglas, a special memory for him. “It was nice to win that one in front of my parents and it was something I drew from in wanting to achieve more in the game,” he said.

The journey to last Monday’s win saw Shane initially feel that anther meeting with John Walsh was on the cards if he wanted to break through the glass ceiling at the weekend. However with Eamon Gibney putting pay to the Irish No 1’s hopes of a third consecutive title, the field opened up in front of Shane but everyone else in the event. Ian Dillon of St Bridgets, John McGrath of Deerpark and McBride’s Barry Thornton were accounted for in making it to the last eight on Sunday evening and a meeting with the recently announced Irish Captain for the World Cup team, Eamon Gibney of Castletown. “I personally felt the Pitch & Putt I played in defeating Eamon (7&6) was as good as anything that I have played. Eamon’s a lovely player himself and I hope both he and the World Cup team do well when they go over to Andorra,” Shane said of his Quarter-Final win.

Monday would bring with it the challenge of not only the Semi-Finals and Final of one of Pitch & Putt’s most gruelling events but also as it turned out the need to be two players from the same club (St Patricks of Enniscorthy) to win the Day Cup. “Martin (O’Neill) was a very tough match, he pitched brilliantly in that match and it was only in the last nine holes that I managed to go ahead of him. When it came to Dayle (Donohoe) I never doubted that it might be him I would be playing in the Final as I had seen him come from behind in nearly all his games throughout the weekend,” Shane said of the prospect of facing another Enniscorthy player in the decider.

Even though Donohoe bogeyed his first two holes and struggled for the most part, trailing by 7 with 11 holes to go, Shane was conscious that there was still work to be done. “When Dayle brought it back to 3, I was just anxious not to make any mistakes at that point and win one more hole to get it over with. Thankfully that what’s happened for me on the 15th!” Shane said of the manner of his Final win. In winning last Monday Shane has become the fifth consecutive winner of the event from a Cork club and the 11th in the last 12 years and he is delighted to be among such illustrious company. “To be mentioned in the same breath as Ray Murphy and John Walsh is a great feeling and a privilege when you see everything they have both achieved in the game,” he said.

Strokeplay will be the next focus now with the provincial and national events on the horizon but Shane hasn’t any major ideas about either St Annes (Munster) or Tullamore yet. “I have to qualify for both of them first! Personally I’d love to make it to Tullamore though, it’s a great venue and one I love playing,” Shane said of the road ahead. His final thoughts were with Seapoint though. “It was my first time here and it just struck me as an amazing place from when I first teed off. It’s certainly worthy of hosting a National and I look forward to coming back here in the future.  It’s a place that I will probably keep in my heart forever after winning this weekend.” 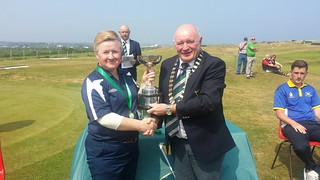 THE legacy continues to grow and after this weekend’s strong showing it’s hard to see where it’s going to stop from here for Ger Ward as she reached the perfect 10 in terms of National Ladies Matchplay titles with a convincing performance from start to finish in Seapoint over the June Bank Holiday Weekend. In winning on Monday, Ger completed a personal milestone in winning a second title at the venue going back to 1985 when she defeated Douglas’ Mary Cronin in the decider under her maiden name of McLernon and making amends for defeats in the two Finals held at Seapoint this Millennium after losing out to Royal Meath’s Ann Hall in 2000 and Marian Byrne of St Bridgets in 2005.

Even though it is her 18th major singles title in the game, a deep grá for the game is what is motivating Ger to keep her storied career going. “I still love this sport so much regardless of whether I win or lose. I still think we have some great players who can beat anyone on their day,” she said of her motivation for striving for more in the game. After accounting for fellow Dubliners Siobhan McDonnell and Maree O’Toole in her opening matches, Ger faced an interesting prospect in the Quarter-Finals in the form of former five time winner of the event Margaret Hogan of Tullamore. “We had a good battle in that match I thought. I suppose the key thing for me this weekend was to keep the fours away from my matches. I’m very happy to just have only had one in the Semi-Finals and Finals and they were something that Margaret probably had too many of in that match,” Ger said of her Quarter-Final win.

Monday’s Semi-Final would see Ger take on RGSC’s Ger Holland, a player who seems to have found a new lease of life with her win in the National O-55’s in Old County last year. “Old County is a very tough course to win on and Ger is playing well ever since and with the Inter-County on her home course this year, it’s something to be very encouraged by from a Dublin perspective,” Ward said of her semi-final win over Holland. With the win Ward had maintained her record of competing in every National Ladies Matchplay Final in Seapoint. The Portmarnock player witnessed Eleanor Walsh’s dramatic chip-in on the last hole to defeat defending champion Chrissie Byrne and set up a Final meeting with Ward and going into the decider Ward had one specific goal in mind. “I had mentioned to Jim (her husband) that I had never been behind in any of my games over the weekend and I knew against a player like Eleanor with the form she was in that it was something I could ill-afford to do,” she said.

Ger held true to that statement winning the first two holes and though Eleanor did well to stay within reasonable distance throughout much of the encounter, 8&6 would be the magic total for Ger in winning yet another Elvery Cup. The thoughts now turn to Strokeplay and a quest for a third successive National title. “Funnily enough I have never played St Stephens but from what I hear it is a very tough track. I hope to go down there the week before and do some practice because I always feel that you have to get comfortable with a course before you play a major Championship on it,” she said. Her final words were on the game in general though, echoing what she said in her acceptance speech about the need for more Ladies to enter competitions at all levels.

“We need all Ladies to keep entering these events because sadly we will lose them if they don’t. I would like to see clubs do more to encourage their Ladies to enter competitions. Thankfully I think the game is getting into a healthy state now and hopefully the entries will improve all across the board.”

What Seapoint Told Us? By John Manning 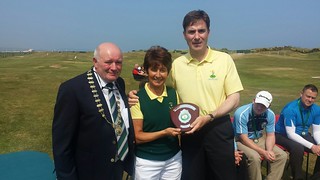 A final collection of photos from the final day is now available on our Flickr page at the following link: