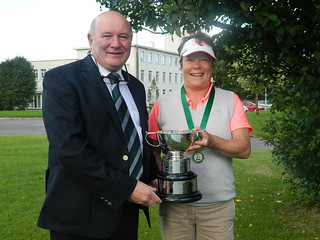 IN bridging a 29 year gap to her other Ladies Strokeplay success back in 1987 in Athgarvan, Tipperary Hills’ Breda Lonergan feels that a void has been filled since she made her return to the game back in 2010. A National Matchplay success in Parteen back in 2014 was added to in St Stephens two weeks ago as she entered the event full of confidence following her win in the Seniors event in Fermoy the previous Saturday.

“The one thing about winning in Fermoy is that I felt like I could have still shot a better score and I think missing out on qualifying for the Matchplay in Seapoint gave me extra motivation as I was anxious to get some ranking points before the season finished,” Breda said of her mind-set going into the main Ladies Strokeplay event. She did have some prior knowledge of the venue in advance. “I had played it twice before and it had come across to me as a difficult pitching course. It’s a place certainly where you take your pars when they come as a lot of it really is about keeping your composure. I’m a player who always tries to play the course and not necessarily the person I am out with,” she said. Rounds of three and five under par gave her a three shot lead over defending champion Ger Ward of Portmarnock after the first 36 holes on eight under par.

Going into the playoff her mind-set was once again to only focus on the course. “I didn’t view it as Matchplay at that point. It was all about just staying ahead at that point and make everyone else try and come up to me. She highlighted a chip-in birdie on the 15th and a par on the 16th as being key moments on the way home to her win as well as a word of encouragement from her playing partner on the last tee-box. “Ger said to me pitch it onto the green and it’s yours which was a very nice thing for her to say at that point,” Breda felt. At present Breda is savouring her double National successes in the space of eight days as she has one more event in mind for the year.

“The Irish Open in Rocklodge is something that I am really targeting in September and the one thing I hope is that we see more Ladies enter events in Munster next year because we don’t get to play the same amount of events as they do in Leinster unfortunately,” she said. Breda concludes with a word of thanks. “I really enjoyed playing with Paula (Nolan), Vera (McCarthy) and Ger (Ward) on the day and I just want to thank my sister Jacinta and Eddie (Tuohy) along with everyone in the club for the support that they have given me.” 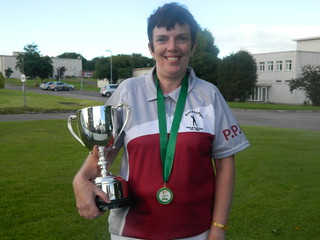 ALTHOUGH she admits that she enjoyed playing the game at senior level, it has been quite the run in Intermediate events for Rocklodge’s Mary Murray in the space of one month. A Munster Intermediate Strokeplay title win after a playoff in Hillview was followed by a convincing win in the Seniors event in Fermoy and she arrived in St Stephens with a great deal of expectation by observers about another success.

“I suppose the way you could look at it is that the Handicap System gave me a second chance at Intermediate level again,” Mary said of her change of grade for 2016. It wasn’t all plain sailing in St Stephens however. “I generally prefer playing in two balls as opposed to three balls as I’m someone who prefers to get on with my game. I barely made it into the Top Six for the playoff but the one consolation I had was that the course was playing tough,” she said. Despite trailing the 36 hole lead by seven shots, Mary still have the belief she could make the gap up. “I’m a fighter as a player, I generally don’t give up no matter how much I’m behind and I played with a lot more confidence in the playoff.

A score of 56 gave her the clubhouse lead and she admitted to going through a range of different emotions as she waited for the other scores to come in. “I was happy firstly that I redeemed myself a bit and then when it became obviously that I had a chance of winning I felt a lot differently!” Her total of 174 saw her triumph by two shots from defending champion Mary Quinn and Ailish Sexton and a decade long time playing the game had yielded a fruitful month for Mary. “I started playing in Bishopstown in 2005 before moving to Rocklodge and I really enjoy representing the club because they are very supportive of me when I do go to play in a big event. I must mention my husband John as well for his encouragement,” she said.

After her magnificent month of Singles success she will know turn her thoughts to wearing the Cork colours at both Senior and Intermediate level. “I’m playing the Intermediates in the Munsters in Tramore and I am also on the National team for RGSC in September. They are two courses that I have played before and I am really looking forward to playing both of them.” 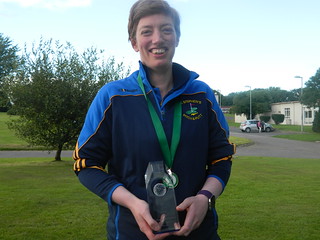 GENERALLY when a national is on a home course for a player, the expectations are high and Mairead Manning felt no different when it came to the Junior event in St Stephens. “I suppose it’s the expectations of the people in the club telling you that you should be winning it when it comes around that makes you realise how big it is,” Mairead said of the build-up to the event which saw herself and club-mate Georgina Harte represent the club in the entire event across all grades.

Two three over par 18’s gave her the lead at the 36 hole mark. “I felt like I was playing well but wasn’t paying too much attention to what the others were doing around me. Eight shots was a good lead to have but the long wait for the playoff was a bit difficult to deal with,” she said. When the playoff did get underway she found herself with a bit of a battle on her hands as Cunnigar’s Stella Kinsella cut her advantage to only two shots but Mairead wasn’t panicking. “I generally play the back nine better and I managed to keep my focus and thankfully I had my advantage back by the time we finished,” she said. Mairead’s score of 177 saw her triumph from Inniscarra’s Jill O’Riordan on 185 as Nuala McNamara of Collins ended the day in third on 187.

Her interest in the game was developed at another Cork course. “I spent a lot of summers down in Rosscarbery playing the course there and that along with my father’s encouragement is what really got me into the game and St Stephens being the course nearest me was the one I joined,” Mairead said of getting involved in Pitch & Putt. She will don the Cork colours for the Junior Inter-County in Tramore as she is just as busy off the course holding three positions on the committee!

“I’m Secretary, PRO and Competition Secretary which is quite a handful but I do get good support from the club when I am playing and it is something I really appreciate along with the support of family.”

Tomorrow: We look ahead to the Leinster U-16 weekend at the Acres in Longford.