BEGINNING our build-up to this weekend’s National Matchplay Championships in Lakeside, we take a quick look at the host club themselves who are marking the occasion with a 50th anniversary book launch. To give us a better insight into the club, Lakeside PRO Ronan Loughnane gives us a brief history of the Templemore based club with details of Friday night’s book launch also included in the article.

Following the announcement in 1963 that the Garda Training College was to be located in Templemore, a Local Amenities Committee was formed to provide additional recreational facilities to meet the needs of the recruits. And thus the Pitch and Putt club was born, being officially opened on July 16th 1965.

After being a real success initially the club struggled somewhat in the seventies until a decision was taken to “go for broke” around 1978 and build 18 new greens. This decision was to be the pivotal moment in our 50 year history as the club has never looked back since. Lakeside went from strength to strength after that with work on the clubhouse commencing in 1984. A new sprinkler system was unveiled in 1992 which was the last major job in terms of development. Lakeside now had a course to rival the best in the country. Great credit is due to those involved during this period as they were the ones who secured the future of the club by providing the foundations for the wonderful facility you see today.

In terms of competition the Open of 1983 and our first Scratch Cup in 1984 were the first big tests of our organisational skills, both of which we passed with flying colours. Our first Provincial hosting job was the Munster Matchplay of 1988 which set us up nicely for the “Big One” in 1989 – the National Matchplay. Once again the club came up trumps and time and time again the Union have come back to us to host many different competitions.

The club takes great pride in presenting this wonderful course to the Nation. We have had many club members who have been to the forefront of the game at various different levels down through the years. Bridget Shelley provided the platform for others by becoming our first National champion in 1992 while our most successful player, Paul O Brien, has been winning titles ever since he began as a juvenile. We have had many fine administrators too, with Myles McMorrow serving two terms as National President. Myles was also appointed as a Patron of the Union in 2015 – a huge honour for both Myles and the club.

The location of Lakeside is what makes it such a unique facility. Set among magnificent natural beauty it has always been an eye-catching course with very high maintenance standards regularly maintained over the years. It has often been said that Lakeside could host a Championship 365 days a year. A fine compliment indeed to all those involved over the last half century.

We hope your experience this weekend matches that.

Details of the book launch are included in the attached poster. 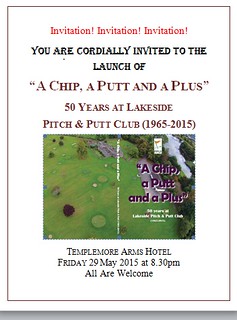 Tomorrow: We speak to our defending champions John Walsh (Gents) and Breda Lonergan (Ladies) ahead of the defence of their titles this weekend.