CONTINUING our build-up to this weekend’s Irish International Open in Rocklodge, John Manning speaks to the winners of the Gents and Ladies events from the last staging in Glenville, Eamon Gibney and Marian Courtney.

International Opens aren’t necessarily held every year. 2014 Irish Open winner Eamon Gibney is actually the defending champion heading into Rocklodge 2016.  Memories of that unseasonal May weekend over two years ago still linger. “I will never forget that day in Glenville. I thought I would never experience anything like it again,” recalls Eamon. He scored a final round of 46 to win the IV 2014 Irish Open at the famous Kiltipper Road course with a 54 hole aggregate of 25 under par 137, three shots clear of 2016 National Strokeplay champion Liam O’Donovan. "It was amazing that I could beat all those players," was Eamon’s reaction at the time. After a rain delay, 36 holes were finally completed at Glenville on Sunday morning, 11th May 2014. Showing outstanding levels of concentration, Eamon Gibney had fired a second round of 46 to lead on 91. Eamon was at that stage only a single stroke clear of the most successful player in international open history, Alan Hanlon. An afternoon of poise and cool composure saw Eamon over the line.

At that juncture, winning at Glenville ranked higher than Eamon's other Pitch & Putt achievements, “But the enjoyment I had playing for Ireland in the World Cup will never be surpassed,” Eamon says now. “It really meant a lot. Apart from the playing in Andorra it was great fun with the lads over there, even with all the other teams.” That’s the successful Co. Meath carpentry and roofing contractor’s memory of a third successive World Cup win for Ireland at the beginning of July, when they defeated Catalonia 3-2 in an exciting final at Xixerella in Andorra. Ireland's captain on the course Eamon secured the vital point with a tense one hole win over Marc Lloret.

Eamon is happy with his domestic performances in 2016.  “This season went well because I won a couple of scratch cups,” is his succinct summary of the campaign, which included a win at the Sean Cahill Memorial Scratch Cup in Navan. He recently helped to Meath to T6 in the 2016 Inter-County championship at R.G.S.C. That was the Royal County’s best result since 2012 (6th).  He was on the Meath 2011 team that finished second at Portmarnock. He has yet to taste Inter-County success as the Royals’ 1996 and 1998 wins came during his twenty year absence from Pitch & Putt. After playing as a juvenile in Stackallen, he gave up Pitch and Putt while he was playing football.

An acknowledged devotee of the global aspect of our sport, Eamon has been and will in future be an enthusiastic contestant of international championships. "I played in the World Strokeplay in 2013 at Tambre. I was well there after two rounds. I was 10 under and 13 was leading. The heat was incredible- 40 or 41 degrees," recalls Eamon ruefully. "I finished level par for the last two rounds. I couldn't stick the heat."  Expect Norway 2017 (World Strokeplay championship) to be on his bucket list. There is one current year international regret. “The only disappointment was not winning the British Open.” That was last month when Gibney led by a shot into the final round on eight under par before settling for second place.  “However fair play to John Deeble.  He birdied the last three holes so he was a deserving winner. Dagenham was a real challenge, a tough course on top of the weather conditions.”

The summer is Eamon’s busiest time work wise but he does like to play at least one international Open every year. Now another international open looms, albeit one with a difference. One on Irish soil and to be held in a region of which Eamon has in the past spoken enthusiastically as a field yet unconquered - the birthplace of Pitch and Putt. "I would love to play some more of the Cork courses. I have only played one or two." This presents an ideal opportunity. He was delighted with his third place behind O’Donovan at the 2013 Catalan Open after a Sunday 48, is not terribly well acquainted with the V Irish Open host venue. “I would only have played one round ever in Rocklodge.” News of Ray Murphy’s recent 38 during the Enable Ireland Open week has reached Eamon’s two clubs (Castletown and Stackallen). He reckons this will probably influence the Irish Open. “No disrespect to any other players but with the scores I hear being done in Rocklodge, I will be amazed if a Cork player doesn't win it, but you never know for sure.”

At Rocklodge this weekend, Eamon will tee it up alongside his World Cup colleague John Walsh (who defeated Murphy in a play-off for the recent Enable Ireland Scratch Cup over the Irish Open course) and Erry’s Kieran Claffey. If he does get into contention at Rocklodge, don’t expect Eamon Gibney to back off. 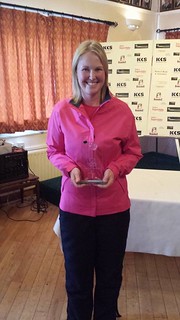 “Unfortunately, I won't be able to play in the Irish Open due to other commitments but believe it will be a great competition,” says 2014 Irish Ladies Open champion Marian Courtney of the 2016 renewal.  Marian was a one shot winner over Tracey McGrath in that 2014 event at Glenville.  It’s unfortunate that Marian won’t be in a position to tee it up at Rocklodge as her recent form has been excellent. A runners-up slot at the National Strokeplay in July was followed by second place in the inaugural British Open.

Marian names her two closest protagonists from that recent British Open tussle in Dagenham as likely pretenders to her Irish crown. “Personally, I think Mary Murray (who won that British Open) won't be far from the winning spot. She is after having a fabulous year and this will be the finishing touch for her,” says Marian. “Eleanor Walsh will also be close too.  Coming from Cork, she will know this course well.”

Tomorrow: We conclude our build-up with a look ahead to the field in both events.