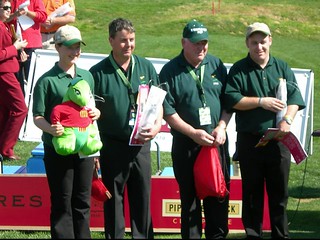 Chrissie Byrne, Darren Collins and Sean Downes were chosen to represent Ireland at the 2nd World Cup, which was contested at Teia near Barcelona from March 23-25, 2006. Sean Downes (51+49=100) produced the best score of the Strokeplay qualifying but Catalonia took the top seeded position, 255 to 263. Non playing captain Sean Breen’s charges defeated Great Britain 3-2 in the quarter-final. A Foursomes win by Chrissie and Darren and a Sean Downes victory over Blaise Fernandes gave Ireland an ideal start and Darren wrapped it up with a singles success over John Deeble.

However, the result that reverberated around the Pitch & Putt world followed – Andorra 3; Ireland 2 – Ireland’s first-ever defeat in international Pitch & Putt. It appeared routine when Chrissie and Darren again took their foursomes encounter in the semi-final. Sean Downes halved with Toni Armengol to give the Irish a 1.5 to 0.5 advantage at halfway. But Armengol holed putt after putt to take Downes’ scalp by 4&2 in their second successive singles stand-off. Chrissie lost to Josep Garcia and Darren’s halved match with Guillem Escabros meant the Irish were out.

There was some Sunday redemption for the team in green. Ireland comprehensively outplayed the Dutch to take third place. Darren and Chrissie did lose their foursomes to Rolf Kwant and Patrick Luning but Sean Downes quickly levelled with a 1 hole verdict over Henk-Rik Koetsier. All three Irish players won the second series of singles to clinch a 4-1 win. 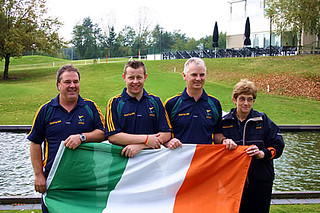 Ireland won the 2008 World Cup of Pitch & Putt at Papendal, near Arnhem, Netherlands on Saturday 18 October. Leading the host nation by 1.5 matches to 0.5 after the opening round of one foursome and one singles, Ireland garnered 2.5 points out of the three afternoon singles to win 4-1 overall and take the world crown for the first time. Star of the tournament Paul O'Brien (the Lakeside player completed a 100% record) beat Jan Tijhuis 4&3. Derek Courtney birdied two of the last three holes to edge out Dutch ace Patrick Luning while Ray Murphy gave a generous half to Rolf Kwant with the overall result decided. Catalonia finished third with Great Britain fourth.

Under the stewardship of team manager Breda Brophy, Ireland had defeated Norway 5-0 in the quarter-finals.  Great Britain offered some stout resistance in the semi-finals.  Steve Deeble and John Deeble halved their foursomes with Ray Murphy and Derek Courtney but Paul O’Brien just edged out Anthony O’Brien on the final green to give the Irish an early advantage. Later singles wins by Paul (6&4 over Steve Deeble) and Ray (by one hole over John Deeble) ensured a 3.5-1.5 victory.

Patrick Luning (Netherlands) recorded an impressive 93 to be the leading scorer in the Strokeplay qualifying round at Papendal while Ireland's captain on the course Ray Murphy was next on 97.  With Derek Courtney and Paul O’Brien supporting with 98s, Ireland ensured top seeding overall by four strokes. 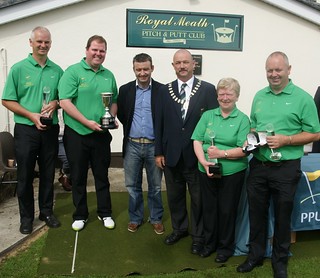 Ireland produced a team total of 32 under par 238 to finish as No. 1 seeds after the IV World Cup Strokeplay qualifying round at Royal Meath on 24 August 2012. John Walsh fired a brilliant 94 for 36 holes after a second round 44. Ray Murphy finished on 97 while John Crangle scored 100. Crangle's opening 53 was the discard 18 and Ireland finished 26 shots clear of Catalonia. Catalonia just pipped the impressive Australians for second slot by a single stroke.

Holders Ireland faced Holland in the first semi-final. Ireland had completed a facile 5-0 victory over Switzerland in the quarter-final while the Dutch defeated GB 4-1. Shock of the championship was plucky Norway's 3.5 to 1.5 matches quarter-final success over 2004 and 2006 World champions Catalonia. In sometimes miserably wet conditions on Saturday afternoon, the Irish and the Aussies qualified for the final with 3-2 semi-final victories. Ireland overcame the Dutch despite the heroics of Rolf Kwant, who in one day claimed the considerable scalps of both John Walsh (by 2&1) and John Ross Crangle (3&2). Inspired by James Rogerson's two singles wins, Australia beat Norway.

Helen McMorrow’s Ireland and Australia contested the World Cup final at Royal Meath on August 26th, their first international Pitch and Putt meeting since Glenville 1997. The sun shone and the large gallery enjoyed an entertaining and sportingly contested encounter. Morning play was very tight and only final green birdies by Ray Murphy in the foursomes and John Walsh in singles gave the home country a 2-0 lead. Ray Murphy was always in command against Brendon Underwood in the afternoon and won by 7&6 to conclude an unblemished six out of six for the tournament.

John Ross Crangle gradually overcame (by 3&2) the spirited challenge of Tom Rickitt. John Walsh triumphed on the final green against Aussie icon James Rogerson to complete a 5-0 success for the Irish.