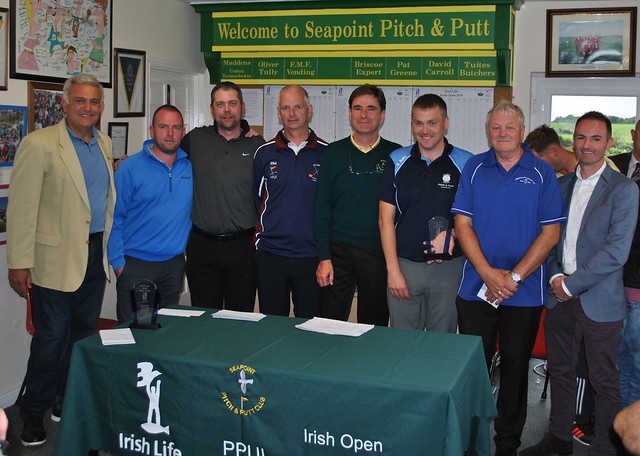 John Manning gives us a statistical history of the Irish Open

Low 54-hole winning aggregate in the Irish Open is the 27 under par 135 returned by Ireland's Damien Fleming at Royal Meath in 2009 and equalled by Frank Dineen (Ireland) at Rocklodge in 2016.

The low 36-hole winning aggregates are Pat Malone’s 90 and Sarah O’Neill’s 110, both recorded at the Covid-enforced shorter format 2020 tournament at Lough Owel.

Highest winning men's aggregate of 148 was returned by Frank Dineen (Ireland) at R.G.S.C. in 2010 (which tied him with Old County’s Stephen Murray).  So Frank Dineen holds both the lowest (joint) and highest record winning three-round aggregates.  Ireland's Breda White won the 2016 ladies Irish Open at Rocklodge with 162, which is the highest winning total in the seven previous Opens.

Ireland's Eamon Gibney won by three strokes at Glenville in 2014.  That is the biggest winning margin in history.  Frank Dineen won the only play-off at RGSC in 2010.  Tracey McGrath clinched the 2011 ladies Open by a comprehensive six shot margin at Deerpark, a winning cushion matched by Geraldine Ward in 2018.  There hasn’t yet been a Ladies play-off but Chrissie Byrne (2009) and her sister Marian (2014) were both single shot victors.

Some players have fine Irish Open records, without actually winning the title.  Ireland's Bryan Delaney has been runner-up (2009) and 3rd (2016).  Liam O’Donovan (Ireland) has finished on the podium in 2014 (second) and in 2016 (fourth).  Esther de Schiffart (Netherlands) was runner-up in 2011, third in 2018 and on five occasions has been the best non-Irish lady.

Ireland’s Tracey McGrath (the champion in 2011) finished in the top two in each of the first four stagings of the ladies Irish Open.

No course has yet hosted the Irish Open on more than one occasion. Inaugural host venue Royal Meath was also the venue for the 2012 World Cup.  John Walsh, whose best Irish Open finish is fourth at Lough Owel in 2020, produced the best Strokeplay score at that 2012 World Cup with -14 (for two rounds).

2010 host location RGSC was also the scene of international Pitch and Putt in 2008 when Ireland defeated The Netherlandsto retain the Willie Parker Challenge Cup over the Kingswood layout.

Best senior (Over 55) score in the tournament was recorded by Frank Ryan (Ireland) in 2018 when the Kildare Inter-County player finished third overall at Seapoint. Officially, the low senior three-round winning aggregate is Dennis Monaghan’s (Ireland) 148 at the same venue four years ago while Barry Morrissey (Ireland) totalled 101 in the 2020 two-round tournament at Lough Owel.

Glenville was the venue for the 2014 Irish Open. Glenville had previously seen international competition in 1997 when Ireland emerged victorious in a Quadrangular tournament, which also featured Australia, Canada and England. 2022 Irish Open competitors, Ray Murphy and John Walsh, played for Ireland in that tournament 25 years ago.

The Ireland v Catalonia international challenge was played at Seapoint alongside the 2018 Irish Open. Victory went to the home country by 13 matches to 5.

42 is the lowest single eighteen hole round that has been recorded at the Irish Open.  The score has been produced in all three rounds (first, second and final) and has been achieved a total of five times.  Bryan Delaney shot 42 in the 2009 second round at Royal Meath. Winner Damien Fleming scored 42 in the final round.  Ireland’s Paudie O’Sullivan was round Deerpark in 42 during the 2011 first round.  At Rocklodge, Damien Fleming became the only player to shoot 42 twice with a 12 under par second round effort.  Derek Courtney is the other player to record a 42 – in the 2011 final round.

Ann Hall and Chrissie Byrne both fired 47s in the opening round at Royal Meath in 2009.  Those remain the lowest 18-hole scores returned by ladies at an Irish Open.

Low final round has been scored by the winner on two occasions – by Damien Fleming in 2009 and by Frank Dineen in October 2016.  Stephen Murray shot a best of the round 48 to get into the 2010 play-off.  Liam O’Donovan fired 43 to clinch second in 2014.   Derek Courtney’s 42 in the 2011 final round earned him a fourth placing. 2018 best final round (45) was recorded by Padraic Sarsfield (who finished 4th) and by two-time European Team championship winner Sean Harkins. Dean Grannell scored 46 en route to second place at Lough Owel in 2020.