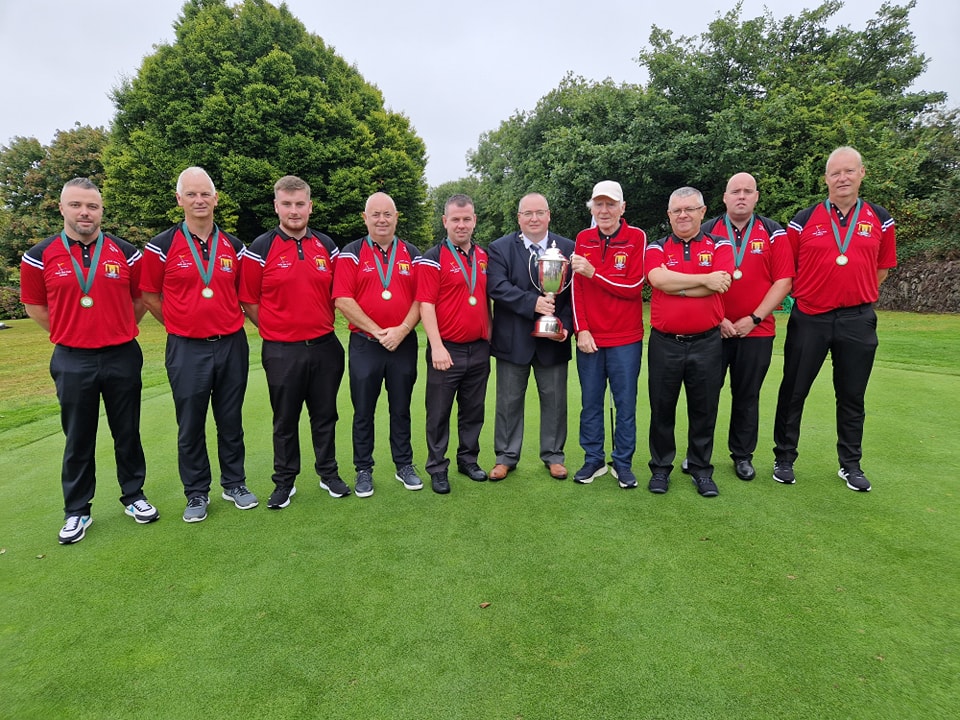 Coláiste an Chraoibhín (Fermoy) finished just a single stroke behind in second position. Cian O'Callaghan (46+52=98), Cian McGirr (51+54=105) and Brian Lombard (60+57=117) ensured that a Cork school finished runners-up in the tournament for the sixth time.

In the semi-finals, John Cahill (the 20th different player from Cork to be runner-up in the National Gents’ Matchplay championship) had overcome (by 4&3) John Walsh (Collins),who was appearing in the last four for the ninth time.

Barry’s first win in three National Matchplay semi-final attempts came (by 3&2) at the expense of William Buckley (Erry). In becoming first Cork player to win the title at Douglas, Barry Morrissey made it five wins in a row for Munster representatives.

Liz Quinn won the National Ladies Matchplay championship for the first time when she overcame Sarah McGrath (Fermoy) by 2&1 in an absorbing final (the first-ever involving finalists from Cork and Westmeath clubs) at Douglas.

The second player from Co. Westmeath to become National Ladies Matchplay champion, Liz Quinn was a 6&5 semi-final victor over Marian Courtney (St. Bridget’s) as the Collinstown lady figured in the last four for the second successive year.

On her way to being the second player representing a Cork club to be runner-up in the Ladies Matchplay Nett Cup, Ann O’Herlihy beat 2022 Cork and Munster Intermediate Matchplay champion Mairead Manning (St. Stephen's) by 6&5 in the semis.

Chrissie Sheedy (nee Byrne) of Ryston won the National Ladies Strokeplay championship for the fourth time in all when she scored 99 at Fermoy on June 18th for a five stroke victory. Glenda Hoey (RGSC) completed a trio of top three finishes at the National Ladies Strokeplay Championships – Junior third in 2013, Intermediate third in 2014 and Senior runner-up in 2022 on 104 (with a 50 second round). Eleven-time champion Geraldine Ward picked-up a bronze medal – her second such ranking since third place was officially awarded in 1987 – with her 51, 53 outing at Fermoy. Cunnigar’s Lorraine Troy became the first player from a Co. Waterford club to achieve a podium finish in the National Ladies Senior Grade Strokeplay Championship when her 93 off seven handicap gathered Nett laurels.

2017 winner Mark Millar (Killineer) finished fourth in the National Strokeplay championship on 139 as he made the play-off round for the seventh time. 2020 Intermediate champion Michael Conway (Tralee) captured the Senor Best Nett award on 87, maintaining Munster’s stranglehold on that prize since it was introduced.

Fergal Power was the first Lucan player to achieve a podium finish in the National Gent's Intermediate Strokeplay championship since his club-mate Damian Creevy triumphed at Cunnigar seven years ago after Fergal’s 88 Nett repelled all challengers at Killineer.

The Saturday at Ringcommons saw Glen Martin became the first Louth player to win the National Gent’s Junior Strokeplay championship since Daniel Clinton in 2010. Glen’s score of 146 tied the lowest winning 54-hole aggregate in history, matching Darren McCann (Cement, now Killineer) who scored 146 at Tullamore in 2003. Glen made it four wins in the National Gent’s Junior Strokeplay championship for members of the Killineer/Cement club when he topped club-mate John Conaghan by four strokes as the same club provided the runner-up in the junior championship in consecutive years for the first time ever.

Joe Franklin (Hillview) became the first National Boys’ Matchplay champion from Co. Tipperary when he overcame Daniel Campbell (Ryston) by 1up in their final at Ryston on July 17.

Leinster Boys’ Matchplay runner-up Michael Holland was the first player representing a Co; Kilkenny club to make the National U16 Matchplay semi-finals where he went down by 6&5 to Joe Franklin. By beating Adam O'Brien (Lakeside) by 4&3 in their semi-final, Daniel Campbell achieved the double distinction of being the first Kildare player in history to reach the National Boys’ Matchplay championship final and the first player ever to contest the Boys’ final over his home course.

With a final win by 4&3 over Sophie Moynihan (Tralee) at Ryston, Sarah Cooney (Seapoint) became the second player in history (after Sophie’s sister Ella) to win the National Girls’ Matchplay championship a year after being the losing finalist.

Adam Byrne guaranteed a host club representation in the National Boys’ Matchplay Championship Plate final for the second successive year (after Luke Kilpatrick at Glenville in 2021).

The two losing semi-finalists in the National Boys’ Matchplay Plate were both from Leinster for the first time ever in a single year - Poulaphouca’s Dylan Kavanagh (who succumbed to Nathan Cronin) and Adam Byrne’s opponent Joshua O’Keeffe (Athgarvan).

2021 National Junior Strokeplay championship final round qualifier Ann Williams (Ryston) continued Kildare’s phenomenal run of success in the All Ireland Ladies Over 55 junior grade Strokeplay championship. Ann returned 130 and became the eighth Co. Kildare winner in the 17 stagings of the event. With 134, Maria Cranney matched club-mate Alice Rice’s feat of finishing runner-up in the All Ireland Ladies O55 Junior grade Strokeplay and is the second Ulster player to take silver in the championship.

Frank Ryan (St. Bridget’s) joined Pat Greene as a three time winner of the National Gents O55 Senior Grade Strokeplay championship when he posted a superb 96 at boiling Bellewstown on July 16th. Frank won by four and he is the first player to win three titles while playing out of three different clubs – RGSC (2007), Athgarvan (2018) and St. Bridget’s (2022). Former two-time winner Anthony Malone (Lucan) shot 100 in second place on his way to becoming the third player in history to achieve a win and a runners-up placing in the National Gents O55 Senior Grade Strokeplay Championship. Brother of Open champion Padraig, Tadgh Harrington became the first member of the Fairview CY club to achieve a podium finish at the National O55 Strokeplay championships when 101 saw the Dublin player come third.Jimmy O’Neill (Larkspur Park) restored Munster’s stranglehold on the Best Nett category of the Gents O55 Senior Grade Strokeplay with 99 at Bellewstown.

The VIII Irish Open was played at the Tullamore course in Co. Offaly on July 23rd/24th.

The most decorated Irish juvenile player of all time, Evan Carry (Castletown) holed a six foot birdie putt on the final green to shoot 48 on Sunday and 143 (-19) overall to win by one from Tullamore's own Patrick Murphy and Kieran Earls (Parteen). Earls went close with a birdie chip on that final green and settled for a final round of 47 for a 144 aggregate. Patrick Murphy also signed for a Sunday 47 to jump up into second place, just piping Kieran Earls on the tiebreaker. John Walsh (Collins) was in a prime challenging position on Saturday night on 96, but a closing 51 left the World Cup and European Championship winner fifth on 15 under par, with William Buckley Junior (Erry) narrowly taking fourth place, courtesy of a 49 final eighteen.

There was great celebration for Tullamore as the popular local member Anthony Galvin claimed Senior (O55) honours with a last round 49 for a 54-hole tally of 151. The host club completed dominated that category with Paul Carey clinching second place. In a threeway tie for runner-up, Carey's 51 on Sunday narrowly edged out club-mate Paddy Kelly (who was third on the countback) and Erry's Leonard O'Meara, who both scored 53 final rounds.

An outstanding 48 in the final round by Eleanor Walsh saw the 2017 World Ladies Strokeplay champion from Fermoy win the Irish Ladies Open.  That left Eleanor four under the card on 158, a full six strokes ahead of former two-time winner and overnight leader Chrissie Sheedy (Ireland) who finished second with Esther de Schiffart (Netherlands) third on 166, just ahead of Breda White (Ireland) on the Last 18.

Jack McShane shot 112 to be the first player since Evan Carry in 2014 to win the National Boys’ Strokeplay Best U13 award in the having also won that category in the same year’s Leinster Strokeplay. Jack also joined Evan as a Leinster U16 Matchplay champion who has won the National Boys’ Strokeplay Best U13 category and win the Helen McMorrow Cup. Jack was the first player to achieve that in a single year.

After posting a new record low winning aggregate for the National U16 Inter-County championship at 312 in Deerpark, Kerry (Brian McCarthy, A Jay Barrett, Noah Sexton and Nathan Cronin) moved on to seven Tommy Murphy Cup wins, consolidating the Kingdom’s third place on the all-time Roll of Honour. Tipperary (Adam O'Brien, Pauric Bergin, Joe Franklin and Jack Duggan) scored 332 and finished second in the National U16 Inter-County championship for the first time since 2003 and for the fifth time in all. Following the introduction of the multiple team format, Kerry are the first county to achieve two podium finishes in the same year. Ben Kelliher, Jayden Chute, Daniel Leahy and Dylan Sweeney produced 334 for the second team that claimed bronze medals.

For the second time in seven years, a whole day’s play in the Inter-County championships was lost to the weather, both times in Cork – Douglas 2015 and Rocklodge 2022.

Results were declared on the 36 holes played on Saturday September 10th. Cork Gents (John Cahill, John O'Leary, Robert O'Donoghue, John Walsh, Ray Murphy, Eoin Walsh) returned a winning team total of 356 to move on to 24 Inter-County wins, extending their lead at the top of the all-time Roll of Honour.

Nine strokes behind on 365, Kerry (Jason O'Regan, Damien Fleming, Alan Hobbart, Michael Conway, Chris Gibney, John McGrath) were runners-up for the fourth time and for the first time since their silver medal performance at St. Annes in 2010.

Dublin edged-out Louth (Sean Goggin, Darren Fagan, Mark Millar, Jim Judge, Ian Donnelly, George Beardsley) for third place on the sixth singles card tiebreaker, just as they piped the Wee County for the silver medals at Ryston in 2017. The teams had tied on 373 at Rocklodge.

Kildare’s 199 was just a single stroke better than the host county. Cork (Mary Murray & Ailish Sexton 97, Sarah McGrath & Paula Nolan 103) finished second in the Ladies Inter-County championship for the 13th time. That ties the Rebel ladies with Kildare in second spot, one behind Dublin on the all-time list.

Nett winners on 149¾, Meath (Paula Lynch, Yvonne Quinn, Margaret Reilly, Ursula Dowd) achieved a podium finish in the National Ladies Inter-County Championship for the first time since the Royals were third at Seapoint in 2002.

Happy New Year to everyone in the Pitch & Putt Ireland Community