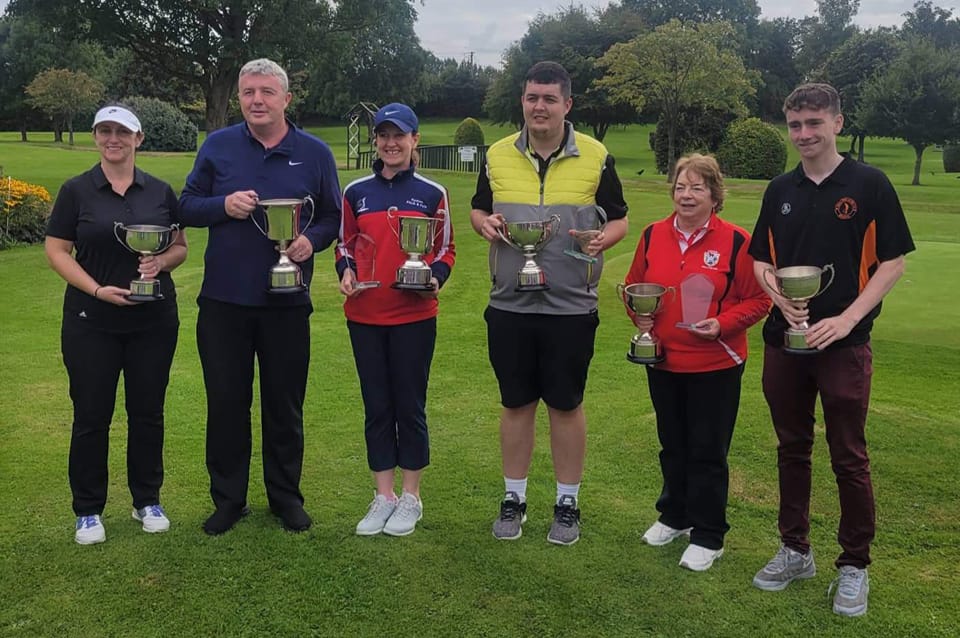 John Carton & Kathleen Carton (Kilbeggan) put together impressive eighteens of 47 and 50 for an aggregate of 97 Stableford points and a five stroke victory in the Leinster Mixed Foursomes at Collinstown on May 14th.Catherine Dillon & Ian Dillon (St. Bridget's) filled second position on 92 points while Best Gross laurels went to Liz Quinn & Rene Jan Bloem (Collinstown) with 86 points (on the back 18 from Ryston’s Chrissie Sheehy & Darren Keogh). First 18 winners were Bridie Cummins & Trevor Cummins (Trim) with 45 (on Back 6 from the Brennan’s of Bellewstown, Marie and Richard) as Ursula Dowd & Eamonn Dowd (Navan) tallied 46 to claim the Second 18 award (on Back 9 from Barbara & Declan Murphy of Seapoint).

The Leinster Gent's Strokeplay Championships were decided at Trim and Stackallen on May 28/29th. In the Senior at Trim, Sean Goggin’s great year started off when the MacBride star scored 146 to edge out Eamon Gibney (Castletown) by two. Eamon denied club-mate Evan Carry for second place on the Final 18. Nett winner was Wayne Allen (St. Patrick's) who signed for 101.

Martin Power was the dominant force in the Junior Championship at Trim – the Ryston man shooting 153 to finish eleven ahead of runner-up Glen Martin (Killineer). David Franklin (St. Patricks) took third on 166 while Nett winner was Ferbane’s Nathan Egan on 95.

Stackallen hosted all of the Leinster Ladies Strokeplay Championships on May 29th. Senior Champion was Chrissie Sheedy (Ryston) who returned 98 for a one stroke margin over Ger Ward (Portmarnock). Liz Quinn (Collinstown) was next with 103 while Maree O'Toole (Shandon) claimed the Nett.

119 secured the Junior Cup for Susan Rodgers (Custume), who was a three stroke winner over runner-up. Catherine Foster (Glenville). Annette Dowling (Trim) took third place with 127 (on the Second 18). The Nett category was topped by Marie Campbell (Glenville).

Jack McShane (Gowran) completed a double in the Leinster U16 Strokeplay Championship (10-13) at Seapoint on August 5th when the Kilkenny player’s 104 saw him home, nine clear of Peadar O'Toole (Athgarvan) in second place, with Jack Courtney (Ryston) third on 118.

Mark Cadden (Oldcastle) headed the field in the Leinster Juvenile Strokeplay Championship (age 14-15) with a scintillating 99. That was five better than Shane O’Reilly (Killineer) as Michael Holland (Gowran) came in third with 110.

Sarah Cooney (Seapoint) posted 115 to capture the Leinster U16 Strokeplay Championship, at Seapoint. Gemma Cuffe (Kilbeggan) was second on 128, ahead of Molly O'Toole (Ryston) on 130.

Tomorrow: We look back at the year in Munster