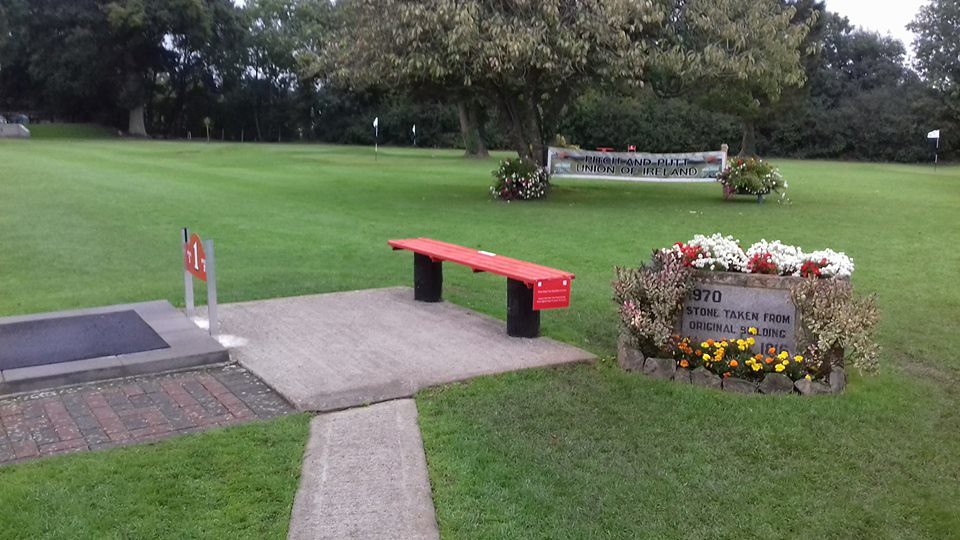 Starting off our build-up to the weekend in Ryston, John Manning looks back at previous stagings of the National Matchplay at the Kildare venue.

Mark Millar retained his Penfold Commando National Men's Matchplay title with a brilliant display at the Ryston course in Newbridge over the 2001 June Bank Holiday weekend.  A six yard birdie putt from just off the back of the 16th green clinched a 3&2 victory over Darren Collins (St. Anne') in their 36-hole final.

The Cork player, who won the 1993 National Intermediate Strokeplay title over this course, got off to a slow start and the holder was two up after the opening 18 holes.  Mark Millar, who won at Seapoint in 2000, shot nine birdies in the opening 13 holes of the second round to open up a four holes advantage.  Darren Collins holed a six-footer for birdie on the 32nd green to reduce the margin and the Cement player was just two ahead when Millar bogeyed the next after pitching in the back bunker.

However, Mark sealed victory with that fine putt at the next.  Darren Collins was just short with his birdie try from a fraction closer.  Mark Millar then joined a select band of TJ O'Riordan (1964/65), Joe Doyle (1971/72) and David Hayden (1988/89) - the only players at that stage to have won successive National Matchplay championships.  Earlier Mark had recovered from two down with eight holes to play to win his semi-final with international colleague Chris Scannell (Collins). Darren also retrieved a two-hole deficit with five to play, helped by a prodigious putt across the two tier 15th green, to win 2 up against Alan Hanlon (Collinstown).

1999 National Matchplay Champion Bernadette Coffey (St. Bridgets) recovered from being four down after 18 holes in her final match to claim a second Matchplay crown.   Reigning champion Ann Hall (Royal Meath) looked to be in control when she shot a five under par 49 first round to hold that strong advantage. Bernadette shot a fine birdie at the 19th to get a hole back and the margin was down to one when Ann bogeyed the 3rd and 7th. Ann Hall still led by one with four to play but a couple of bogeys in a row at the 33rd (as a result of a bunkered tee-shot) and 34th (where she chipped too strongly) were to cost her dear.

Bernadette Coffey had birdie putts on the final two greens to clinch the match but the ball lipped out on each occasion.  The chances swung one way then the other over the extra holes, Ann Hall missing a particularly good possibility for birdie at the tricky third. Bernadette finally took her opportunity when a curling five foot birdie putt found its target on the 40th. She was ahead just once in the match - on the final green.

Earlier in the day, Bernadette ended the hopes of club-mate Marian Byrne (by 3&2) in their semi-final repeat of the 1999 final while in the other semi (a rematch of the 2000 final), Ann Hall was a 7&5 winner over Portmarnock's Geraldine Ward. The 2001 final was the longest on record until 2011 when Margaret Hogan defeated Tara Dillon at the 41st in Collinstown.

Back in the “pre-twinning” era, the National Gents Matchplay was twice played in Newbridge, at what was then known as Irish Ropes.

Mick Forrest (Rocklodge) notched up the first leg of his 1976 Matchplay/Strokeplay double at Irish Ropes when he beat club-mate Joe Buckley by 2&1 in the National Matchplay final (sponsored by Lenehans) on June 7th. Forrest was 12 under par for the holes played in the final and he later won the Strokeplay at St. Annes to become the first player in history to win the National Matchplay and Strokeplay in the same year.

Forrest had lost the 1969 semi-final at Rocklodge to fellow Corkman Joe Doyle who went on to claim the title that year. However, Forrest made no mistake seven years on as he won his semi-final battle with John Redmond of Athgarvan while Buckley defeated Jack Perry (Erins Isle) in the last four.

The 1976 Gents’ Matchplay was the second national championship to be contested at Irish Ropes, following the 1973 Gents’ Inter-County Championship.

The competition returned to Irish Ropes (this time sponsored by Sunday World) in 1982. In the June 7th final, Tommy Rusk (Royal Meath) beat the late John O’Leary (Carrigaline) by 6&5.

Tommy beat Lucan’s Noel Costello (who won that year’s Dublin Matchplay) in the semi-final while John O’Leary triumphed in an all-Cork battle against the youthful Alan Moore (Douglas). Moore was just out of juvenile ranks, having helped Cork to the previous year’s U16 Inter-County title at Parteen as well as capturing the National Boys Strokeplay Championship.

Noel Costello was a member of the Dublin team that went on to claim the Inter-County title at Cloghogue later in 1982, with Rusk’s Meath in second spot. Tommy Rusk did help Meath to Inter-County honours, at Glenville in 1987.