Declan Sheedy looks back at the Ladies & U-16 events in both provinces at the weekend. 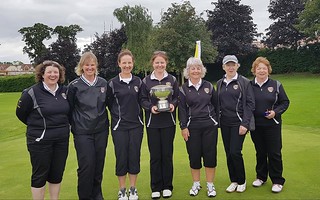 Unfortunately the weather was to have a significant impact on this year’s ladies and U16 Leinster Inter-County Championships as torrential rain and downpours left the NEC with no choice but to cancel Saturdays play in Castletown and Navan which would mean the Leinster Inter and Junior Ladies and the Leinster U16 championship being rescheduled for a new date.  Luckily Sunday would prove a much better day and huge congratulations must be extended to Royal Meath who accepted the request to host the Senior Ladies and Gents championships on Saturday evening but managed to deliver an excellent course, facilities and venue for all on Sunday.

The Ladies Senior Championship would be the only Ladies or U-16 grade played for over the weekend with the teams of Kildare, Louth, Dublin and host Meath fielding team of six players playing over 18 hole Scotch Foursomes and 18 hole Singles format.  After the Scotch Foursomes it would be Kildare who would hold a one shot advantage with the Kildare Ladies returning a combined 14 under, Dublin followed with 13 under, Meath with six over and Louth on nine over. Dublin’s Pauline Balfe & Glenda Hoey would return the best score in the Scotch Foursomes with eight under with all to play for heading into the Singles.  With all six singles scores to count, every shot was critical key and it proved to be the case as Kildare would return victorious by only two shots at the end of play.

Kildare returned a combined singes score of level player for all six players which would be one shot better than Dublin giving them a two shot overall victory on 14 under. Dublin claimed the silver medal with a 12 under total; Meath took the bronze on 23 over with Louth finishing on 47 over.  Kildare duo Chrissie Byrne and Tara Dillon returned the best Singles score on the day of five under each.  Another great Championship and battle between Kildare and Dublin and very good performances by Louth and Meath all representing their counties so well and with pride.

The Ladies now turn their attention and practice towards the National Inter-County in McDonagh on the weekend of September 7th-8th where they will do battle all over again. 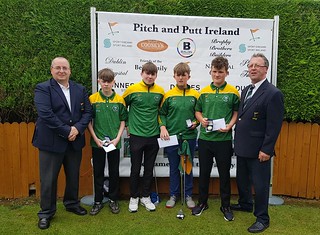 The U-16 teams took to the tee on Sunday where there were six teams of four entered this year with two teams each from Cork, Kerry and Tipperary. The format was Strokeplay with 18 Scotch Foursomes and 18 Singles. The competitive nature of this Championship was evident after the Scotch Foursomes scoring where Kerry 1 took a five shot lead over Cork 2 with eight under with Kerry 2 a further three shots behind.

A round of 48 from Kerry’s Cillian Courtney & Robbie Harnett was the best on the day and assisting Kerry 1 with their lead. Kerry 1 would never look back from the lead they created and over the course of the singles they extended their advantage to secure victory with a total of 18 under.  Cork 2 would hold onto the silver with seven under while the Cork 2 team would pick up the bronze medal with a combined total of two under. Kerry 1’s Cillian Courtney returned a brilliant 45 in the singles and best of the days for the 18 holes Singles. Congratulations to Kerry on their win.

Next stop of the U16’s will be the National Inter-County to be played at Glenville on the weekend of Aug 25th where the future of the game will exhibit their skills.

The Munster Ladies Championship was played in one grade with teams of four playing 18 holes Scotch Foursomes and 18 holes Singles in Stableford format. Like the U-16’s counties could allowed to field more than one team which again gave more Ladies the opportunity to play and represent their county as Cork and Tipperary both entered two teams while it was great to see Waterford and Clare return to the Inter-County scene as a result of the four person formats. Gross and Nett prizes were up for offer and the Gross title went to the strong Tipperary Team 1.

They led by two shots from Cork 1 after the Scotch Foursomes and it was a lead they would not relinquish as the quartet lifted the title with a combined score of 230 pts at the end of play.  In the Nett section it would prove to be a very close encounter and come the end of 36 holes the Tipp 2 team and Cork 2 team would be tied on a Nett score of 250 pts.  It would go to a count back on the back nine after which the Tipperary Ladies would win the Nett prizes from the Cork team.

The battle for third was just as close with Clare and Cork 1 both tied on 238 pts with the Banner ladies being awarded third Nett with the better back nines.  Best Nett Scotch Foursomes scores on the day would go to Cork’s Mairead Manning and Sarah O’Neill plus Tipp’s Mary Quinn & Frances Ryan with scores of 44 pts while best scores in the singles came from Mairead and Liz Forde of Tipp with 45 pts.

Like the Leinster teams focus now turn to McDonagh where teams with revert back to the six player team format with all counties hoping the can be the one to bring the National Inter-County title back to Munster after the weekend of September 8th.

Tomorrow: John Manning looks at the Irish contingent heading to the European Strokeplay Championships in Dagenham.