2019 National Under 16 Strokeplay Boys and Girls

AFTER a busy weekend of action in Glenville, Communications & Press Officer Jason O’Connor reports on all four of our events at the National Youth Championships this past weekend. 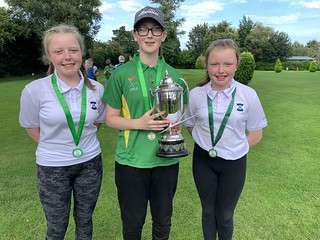 ALTHOUGH it was the smallest field for the weekend, it produced arguably the tightest of all the results as Sophie Farnan of Skryne retained her title but only after a nine hole playoff with Eimear Ahern of Lucan as the competition produced the same top three as the previous year in Fermoy.

Sophie had level par for her last nine holes in the first round to post four over par for her first 18 as she led Eimear by five shots after the halfway stage. Eimear responded with level par for the first nine holes of her second round as matters were tied between both Girls with nine holes to play. Incredibly both went around in 32 for their closing nine holes meaning that both of them finished on 14 over par and a further nine holes would be needed to decide the outcome.

Sophie made the better start to the playoff as despite Eimear’s best efforts to salvage matters late on, Sophie recorded 31 for extra nine as opposed to 35 for Eimear meaning Sophie retained her title and became the fourth Girl to win the event twice in the last decade of the competition.

Third place would go to Eimear’s sister Maebh once more as she needed countback to get the better of Seapoint’s Sarah Cooney for the prize. Maebh went around in 71 for her second 18 with Sarah doing 75 after both players had finished on the same score of 149.

FOLLOWING a similar trend in recent stagings the Eugene McCarthy Cup went to the only player to shoot double figures as Patrick Mitchell of St Annes put in a strong second round to record a four stroke victory with an 11 under par score for the Clare native to become the first player to win the event since Evan Carry’s ‘three-in-a-row’.

Patrick recovered from a poor start to proceedings where he was one over par after nine holes but put himself two shots off the lead at the halfway stage by going six under par for his next five holes and moving to five under for the tournament. It was a position he shared with Cian Mulcahy of Collins and St Patricks Dylan Hudson as Deerpark’s Cillian Courtney was the halfway leader on seven under par.

The Killarney player failed to improve on his score however in the second round as he finished the tournament on seven under as Kilbeggan’s Conor Mullins had five under par for his second round to join Cillian on seven under in the clubhouse. Patrick moved to nine under par with nine holes left as he picked up two further shots in the closing stretch to finish on his 11 under par total. The win meant the St Annes club bookended Evan Carry’s ‘three-in-a-row’ as Ryan Towler was the 2015 winner in Tipperary Hills.

Conor Mullins claimed second on countback from Cillian Courtney with seven under par, the same score his older brother Jack shot the previous year to finish second as well in Fermoy as Dylan Hudson was the closest to the Top Three with four under par. The Helen McMorrow Cup for the 10-13 prize-winner meanwhile was won by Deerpark’s Brian McCarthy in its inaugural awarding as he had solid rounds of level and one under par to finish on 107. Brian is the son of former National Gents Matchplay winner Derry McCarthy (2004) as finished off a great summer where he placed third in the Munster 10-13 category.

He beat off some strong competition from his own club which donated the Cup in Helen’s memory with club-mates Ryan McCarthy, Noah Sexton and Nathan Cronin all only within a number of shots of him (six) in the finish. 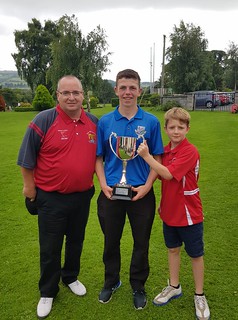 FOR the first time in the three stagings of the event the winner came from outside of Douglas, Cork and indeed a Munster club as Glenville’s David Horan completed a great weekend for him personally where has was on the winning Dublin Intermediate Gents team in the Leinsters in Royal Meath on Saturday before winning the Keohane Cup with a score of eight under par.

Horan was consistent in shooting two under par for every nine holes in posting his 36 hole total as Evan Carry was his closest challenger in his first time playing this event. Carry did come within one of Horan late on but eventually had to settle for a four under par score after posting an opening 18 holes of two under par.

A good second round of four under par gave Sean Clerkin of Killineer third meanwhile as he finished the event on three under, one ahead of former National U-16 Matchplay winner Seanie Bellew of Castletown who had one over as well in his first round before finishing on two under. 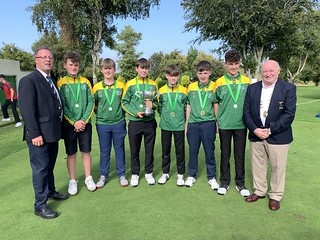 DESPITE finding themselves third overall after the Scotch Foursomes, Kerry powered to victory after the Singles with a 33 shot turnaround to retain the Tommy Murphy Cup on Sunday as the county won the event for a sixth time in total.

Cork had looked to be in a strong position after the Singles on 18 under par combined, 12 clear of hosts Dublin but it was the defending champions that stole a march on everyone in the second 18 holes. Round of four under par for both Cillian Courtney and Bobby McCarron got Kerry’s challenge going in earnest as Eoin O’Riordan Looney finished on two under par and Jake Shine brought in level par.

The main feature of Kerry’s Singles turnaround was the performance of Robbie Harnett who had a fantastic eight under par which included a hole-in-one on the 15th near the completion of his round. Kerry finished on 22 under par combined as Cillian, Robbie and Eoin won the event for a second time in their counties colours as Ryan Neeson made up the six player team from the Kingdom. Dublin had Singles rounds of four under from Luke Devlin, three under from Darragh McGibney, one over from Oisín Horan and three over from Alex Keegan in their Singles as the team which also included Jamie Palmer and Conall Barnes finished on three under in total.

It was Dublin’s best performance since their 2015 win in the competition as Westmeath finished third for the second successive year in the competition. There were one under combined for their Scotch Foursomes before four under from Jack Mullins, two under from Jack Buckley along with two over from Brian Bray and three over from Eanna Rabbitte helped the side featured Conor Mullins and Billy Buckley to an eventual score of 437.

That was a commanding 25 shots ahead of Meath in fourth on 462.

Click on the scoreboards above for news of how all players in all four events fared this weekend.

There will be a report of the Leinster Inter-Counties played on Saturday posted tomorrow.