THE Gents 0-55’s this year at the PJ & Catherine Bell Championships will be played over two days with the Seniors on Saturday this year followed by the Intermediates and Juniors on Sunday. Communications & Press Officer Jason O’Connor takes a look at the field in the three grades.

FRANK Ryan heads down south in defence of the title this year as the former multiple winner tees-off in the third three-ball with Ballinlough’s Billy O’Brien and Erry’s Sean Buckley around lunchtime. Other former multiple winners of this event, Lucan’s Anthony Malone and Bellewstown’s William Sheridan find themselves in the last two pairings, Malone playing with Patsy Farrell of Bruff while Sheridan plays with Old County’s Paul Griffin.

Three-time winner Pat Greene of Seapoint is in an interesting three-ball with Munster Intermediate Strokeplay Runner-Up Weeshie Murphy of Raffeen Creek along with Tipperary Hills’ Ray Lyons. Weeshie’s Raffeen Creek club-mate, Richard Jordan, finds himself in a three-ball with a Louth and a Tipperary player as well in Pat Fanning of Seapoint and Thomas Looby of Hillview. Former National Matchplay & Strokeplay winner Liam O’Brien of Douglas returns to competitive action with John Delaney of St Bridgets and Hillview’s John Fitzgerald his playing partners on Saturday.

It will be interesting to see if the return to Munster benefits the Cork players or will the Leinster domination of the grade continues. 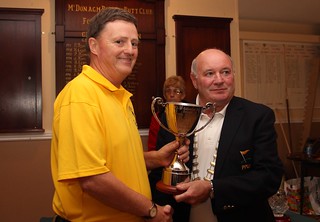 Strange that Intermediates and Juniors get their own day on Sunday but it’s the way the entries have worked out this year in both having the higher number than Seniors as a lot of eyes will be on Tipperary Hills’ Brian O’Flynn to see if he can do the Intermediate double at national level. O’Flynn tees off alongside Tralee’s Roger Guthrie and Majestic’s Pat Haugh as the defending champion here is from another Tipperary club in Riverdale’s Sean Minogue as he tees off with Ryston’s Sean Kearney and Michael Bransfeld of Raffeen Creek who has won prizes in the Junior competition in the past.

Local interest will centre on ESB’s Arthur O’Farrell and ESB’s Gerard Forde. Arthur tees-off alongside Gowran’s Christy Purcell and Michael Walsh of Ardnacrusha in the first group of Intermediates at 12.30pm while Gerard tees-off in the third last group alongside Patrick Tinsley of Ryston and James Gill of Rochfortbridge. Cork representation is so strong in the field that only one three-ball does not contain a Cork player, that being the second three-ball of Cill Na Mona’s Martin Walsh, Shandon’s Charlie Egan and Bruff’s Joseph O’Riordan. St Annes, Raffeen Creek and Rocklodge all have three competitors each in the grade. Michael Long of St Annes plays with Albert Mithen of Loughlinstown as well as Castletown’s Phil Carry as his club-mate George Mulcahy plays with Shandon’s David Forman and John Gilsenan of Trim.

The other St Annes player, Sean O’Brien, plays with McDonagh’s Peter Kearney and Tipperary Hills’ Eddie Jones as John Tett of Raffeen Creek plays with Old County’s Thomas Balfe and Stackallen’s William McNally. John’s club-mate, John O’Grady, precedes him in playing alongside Christy Kane of Lucan and Parteen’s Ger Roche as the Rocklodge trio of Des Quinn, Patrick Kelliher and Martin O’Sullivan tee-off in the latter part of the draw. Des plays with McDonagh’s John Doran and Riverdale’s Patsy Farrell as Patrick plays with Cloghogue’s Michael Concannon and Rochfortbridge’s Pat McCarthy.  Martin O’Sullivan meanwhile plays in the final group to tee-off with Charleville’s Michael Curtin on the stroke of 2pm. 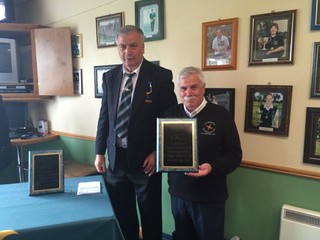 36 players taking part in the grade on Sunday morning with the 1-2-3 from McDonagh last year all taking part this year again. Christy Sweeney of St Bridgets is the defending champion as he plays alongside David Foley from the host club and Sean O’Connor from Hillview. Just before Christy’s group, third place finisher last year, Nicky Byrne plays with McDonagh’s Gerry Doyle and Riverdale’s Seamus Gleeson as 2016 winner and last year’s runner-up Martin Verbeek returns from Holland for this year’s event.

A lot of interesting possibilities as everyone prepares to descend down Half Moon Lane for this weekend’s proceedings.

Tomorrow: We preview the National U-16 Matchplay Championships in Deerpark.