THIS weekend’s National U-16 Championships see a welcome introduction in the form of a first ever National U-20 Championship which will get the weekend under in Clara on Saturday morning. Communications & Press Officer Jason O’Connor takes a closer look at all the events in Erry this weekend.

WHILE such an event might have been played at more localised levels in the past, the PPUI will hold its first National U-20 Championship this Saturday with some familiar faces from recent years at Juvenile level entered. Three former winners of the National U-16 Championship are entered, namely Deerpark duo Creagh Courtney and Conor McCarthy (2011 and 2013 respectively) along with St Annes Ryan Towler (2015). Two of the recent medallists in the National Intermediate Strokeplay in Hillview are entered as well with winner Conor Irwin (Douglas) and third place finisher Michael Cronin (Deerpark) due to take part after being the final pairing in the playoff in Clonmel for the Intermediate title.

Conor Fahy of Parteen enters as the holder of two Munster titles at the same time namely the Munster Intermediate Strokeplay and the Munster Junior Matchplay while Douglas’ Cian Morrison has competed strongly at U-16 as well as Schools level winning two National U-16 Inter-Counties with Cork. Gowran’s Nicholas Brennan and Old County’s Ross O’Reilly lead the Leinster challenge, O’Reilly a former Leinster Strokeplay winner and National U-16 Inter-County winner with Dublin in 2015 while Brennan featured in last year’s Leinster U-16 Matchplay decider in Navan. Conor Bowdren of St Annes was on last year’s National Inter-County winning Cork U-16 side while CPM’s Gareth Walsh, Navan duo Jason Gibney and Chris Matthews and Kilbeggan’s Michael Carton complete the Leinster entries.

Last year’s National U-16 Runner-Up Lorcan Martin of Deerpark is another to look out for as 22 players are entered in all and it will be interesting to see how some find the return to competitive action after being away from the national stage for a couple of years.

FOR the first time since 2012, the holder of the Eugene McCarthy Cup is able to defend his title as Castletown’s Evan Carry heads to Erry looking to defend the title he won in Royal Meath last year. Evan has had a decent year thus far in winning the Leinster Strokeplay and following up with a win in the Plate competition of the Leinster Matchplay. But it’s his club-mate Seanie Bellew who enters off the back of victory in the most recent underage event, the National U-16 Matchplay where he won the Helen Persson Cup after two busy days in St Stephens. The player he defeated in that decider, Ballinlough’s Iain Aherne will bid for a National success to go with the Munster U-16 Strokeplay title he won last year in Tramore.

Cillian also won the lower age prize in the National Strokeplay last year with third place finisher Padraic Looney also amongst the entries from the Killarney club. Darragh O’Callaghan from the Killarney club was runner-up in the Munster U-16 Strokeplay while Fermoy’s Dylan Seymour was the Runner-Up in the Munster U-16 Matchplay. Leinster U-13 Strokeplay winner Oisin Horan of Glenville is entered as is the runner-up in that section Padraig Carton of Kilbeggan with older age group runner-up Lennon Blake of Old County and third place finisher David Horan of Glenville also entered for Saturday. Parteen duo Shea Fennell and Patrick Mitchell were the beaten Semi-Finalists in the Munster U-16 Matchplay as local hopes in Erry rest with their five entrants.

They include Conor Doyle, Matt Fleming, Niall Robbins, Dominic Scully and David Sheridan with Tullamore the other Offaly club with entries for Saturday in the form of Daniel and Michael Fox with Coleby Clear. The Fox brothers contested a dramatic playoff last year for the Leinster U-13 Strokeplay title with Daniel getting a hole-in-one at the final playoff hole to win the title from Michael.

We haven’t had a playoff for the Eugene McCarthy Cup since 2013 in Raffeen Creek but with players under the age of 10 allowed to take part in the event for the first time ever it promises to be an interesting occasion as Offaly hosts the U-16 weekend for the first time since 2002 when it was held in Tullamore. 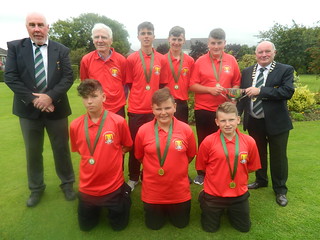 Seven counties have entered for the Tommy Murphy Cup battle on Sunday as play over 36 holes will feature 18 holes of Scotch Foursomes followed by 18 holes of Singles. Meath and Kerry are the provincial winners from last weekend’s events in Leinster and Munster both winning in different circumstances. Meath were convincing winners in Collinstown last Saturday, powered on by Evan Carry and Sean Bellew with Sean Clerkin, Katie Rose Heeney Joseph Smith and Killian Smyth the other members of the winning Royal County side.

Munster was a total different affair as Kerry got the better of Cork after a three hole playoff involving all six players. Adam Kelly, Cillian Courtney, Jack McCarthy, Darragh O’Callaghan, Erin Moloney and Robbie Harnett represent the Kingdom with Cork strengthened a bit this Sunday by the inclusion of National Matchplay Plate Competition winner Aaron Roche after not being available for the Munster competition last week. Glenn Towler, Cian Murphy, Iain Aherne and Dylan Seymour also feature for the defending champions as they will play with Offaly in the final pairings.

Louth enter despite not featuring in the Leinsters last week, Dylan Keating, Oisin Mulryne, Eoin and Luke Murphy along with James Stewart making up their side. Three different counties have won the Tommy Murphy Cup since the turn of the decade with four wins for Cork (2010, 2013, 2014 and 2016), two for Dublin (2011 and 2015) and one for Kerry (2012). The time might be ripe for a different winner but it will be interesting to see how it all pans out in Clara on Sunday.

We wish everyone involved in the three events this weekend the very best of luck, updates will be available on the PPUI website throughout the weekend on proceedings in Erry.