CLOSE to 150 players will head to Cloghogue in Newry this weekend for the staging of the National Ladies & Gents O-55’s Championships. Communications & Press Officer Jason O’Connor takes a closer look at the field in this preview.

Eight years after it last hosted a PPUI National event in the form of the 2009 Inter-County, Cloghogue plays host to the National O-55’s Championships this weekend with the Ladies playing on Saturday and the Gents in action on Sunday. In the Ladies Junior grade there are 25 entries, headed up by last year’s winner of the grade from Fermoy in Dina Dillon of St Bridgets. The host club have eight entries in the form of Kathleen Brady, Marian Cranney, Anne Jackson, Roisin McNulty, Nora O’Hare, Rosaleen O’Rourke, Patricia Smith and Anne Rice.

Loughlinstown’s Betty Cody is a former winner at O-55’s level as well having won back in 2014 in Gaeil Colmcille. There are only two entries from Munster in this grade namely former Munster Junior Strokeplay Champion Margaret O’Donovan from Bruff and Liz Forde of Riverdale. St Bridgets’ Anne Sweeney was second to Dina Dillon in this year’s Kildare Junior Strokeplay as in total there are six players from the Lilywhite County clubs entered including McDonagh’s Breda Brophy, Prosperous’ Lily Moore, Ryston’s Theresa O’Keeffe and St Bridgets’ Gabrielle Sweeney.

The Intermediate grade has 22 entries but only one from the host club in Valerie Rogers as Mary Sherry, Mary Donnelly, Bernie Dunne and Mairead O’Toole are some of the names to look out for in a another field that has strong Kildare representation. Riverdale’s Margaret Forde enters in a rich vein of form however having completed a Munster and Junior Strokeplay double already this month and will be expected to perform strongly again this weekend. Margaret is one of only two entries from Munster with Collins’ Patsy O’Donovan the other to be making the long trip up north. The Leinster Intermediate Strokeplay Champion in Lucan’s Phil Condron is also amongst the entries for Saturday as former Irish Captain Maree O’Toole enters off the back of finishing second in the senior grade last year.

Bellewstown’s Marie Black enters having finished second in the Meath Intermediate Strokeplay as club-mate Iris Cunningham is also amongst the entries. The Senior grade meanwhile has a small field of seven with defending champion Breda White back to defend her title. The winner of last year’s Intermediate grade below in Fermoy, Mary Murray is also amongst the senior entries having won the Cork Senior Strokeplay grade back in May. RGSC’s Ger Holland was the 2015 winner of the grade back in Old County as local hopes rest on the shoulders of former National Strokeplay winner Marina O’Rourke and Bernie Sommers. Skyrne’s Kathleen Geraghty and Seapoint’s Noeleen Bedford complete the field with the Inters and Seniors playing in the same shotgun start time of 1pm. 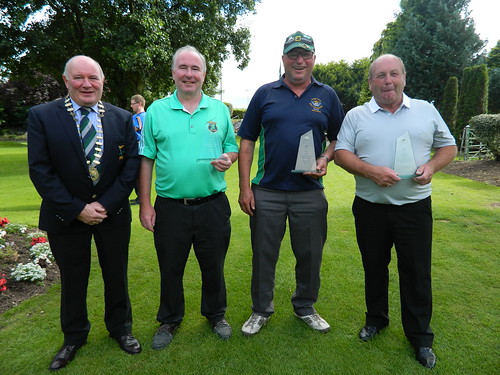 The Gents grade featured qualifying with 81 playing across the three grades on Saturday. In the Junior there are 27 players with two making the trip across the continent to take part in Newry. Dutch duo Ed Janssen and Martin Verbeek (playing out of Lough Owel) return after Martin pulled off a momentous win in Fermoy last year in the grade. Local hopes for this grade will be with four players, Rodney Carroll, Brian Grant, Matt McArdle and Finbarr Oakley as Loughlinstown and Riverdale have three players each amongst the field. John Crangle, Noel Flanagan and Brendan Warner represent the Dublin club while Liam Bourke, Peter Dunning and Seamus Gleeson play with the Tipperary club. Raffeen Creek’s Donal Field and Bruff’s Michael McGuane are the sole Munster players, with Michael having finished second in the Limerick Junior Strokeplay this year. McBride’s Pat Gorman and Seapoint’s Paddy Davis complete the Louth/Down/Monaghan entries in the grade.

The Intermediate grade has the biggest amount of competitors with 30, three of which comes from the host club in the form of Ronan Hollywood, Pat McDonald and Denny McGuinness. Erins Isle’s Charlie Egan is the defending champion from last year in Fermoy with the winner of the previous year’s Junior event in Old County, Ryston’s Aidan Whelan is also amongst the field. Old County’s Christy Broe is another former winner at O-55’s level as Trim’s Paddy Kelly was amongst the prizes in the Meath Intermediate Strokeplay. Cement’s Gel Martin was the winner of the LDM Intermediate Strokeplay with five of the field coming from Munster clubs. They include Cork trio Sean O’Brien (ESB), Eddie Hogan (St Stephens) and John Tett (Raffeen Creek) as Riverdale’s Sean Minogue and Parteen’s Ger Roche also make the trip up to Newry. John Carton of Kilbeggan is another player to look out for amongst the field as the Intermediates will play in the same lunchtime shotgun start at the Seniors.

The Senior grade has seen Bellewstown’s Wally Sheridan and Lucan’s Anthony Malone trade victories over the last four years but there are some potential entrants to break that duopoly including former winner Pat Greene of Seapoint along with Johnny Campbell Snr of Cement in a course they should know well from being in their Regional Board area. Michael Concannon is the only player from the host club amongst the field with Cement’s Phillip Reynolds and Seapoint’s Feichin Rath the other players from the Regional Board amongst the field. Bruff’s Pacelli Darcy will enter having won the World Pairs on the continent last month as club-mate Patrick Farrell (Limerick Strokeplay winner) and Parteen’s Patrick Earls also make the trip up to Newry. Athgarvan’s Frank Ryan was second in the Leinster Strokeplay in St Bridgets having also finished second in the Kildare Strokeplay.

Sean Buckley of Erry was Offaly Strokeplay with Tony Carroll of Old County winner of the Intermediate Championship two years ago. Raffeen Creek duo Richard Jordan and Barry Morrissey make the trip up to Cork as Hillview’s Noel Joyce will be another interesting entrant to watch on Saturday afternoon. It’s just a straight 36 holes to decide these events as opposed to the regular 54 holes for the main Strokeplay events. Shotgun Starts create a focus more on your own game as opposed to what’s going on elsewhere so it will be interesting to see what emerges as the winning scores in the six events this weekend in Cloghogue.

We wish all those taking parts in both Cloghogue and St Stephens this weekend the very best of luck. Updates will be available on the PPUI website throughout the weekend from both venues.