Pictured above are our 2017 National Matchplay Champions John Ross Crangle (Gents) and Geraldine Ward (Ladies) pictured with PPUI President Mervyn Cooney. We thank our sponsors Horizon Energy Management for their continued support of this event and thank Tipperary Hills for being fantastic hosts this weekend both on and off the course over the Bank Holiday Weekend. We commend the players for playing to such a high standard over the weekend especially today in such difficult conditions. Relive how the whole weekend went by the scoreboard and the blog for each day’s play. There will be plenty of photos and other features from this weekend to follow in due course but for now it’s a goodbye from a very wet Tipperary Town!

Gents Final: All over and the wait and heartache is over for John Ross Crangle as he finally wins a National Singles title after a 3&2 win over Ray Murphy in the Final. More to follow.

Gents Final: Dormy 3 to JR Crangle as he closes in on a maiden National Singles title in the Final over Ray Murphy!

Ladies Final: All over and Ger Ward retains her title and wins an 11th Matchplay in total after a 2&1 success over Chrissie Byrne holding off a late charge from the Ryston player. Well done to Ger on another momentous success.

Gents Final: JR Crangle remains 3up on Ray Murphy with 6 holes to play.

Ladies Final: Dormy in the game now as Ger wins the 16th hole to go 2up on Chrissie with 2 to play!

Gents Final: Ray wins the 10th hole to cut JR's lead to 3 with eight to play.

Gents Final: JR now has a 4up lead over Ray with 9 holes left

Ladies Final: Down to 1up now for Ger as Chrissie wins the 14th!

Ladies Final: The 13th hole is halved between Ger and Chrissie, still 2up to Ger.

Gents Final: JR Crangle still has a 3up lead over Ray Murphy.

Ladies Final: Still 2up to Ger over Chrissie with 6 holes left to play.

Ladies Final: Ger wins the 10th hole to put up her 3up on Chrissie again. Chrissie responds with a win on the 11th to keep it at 2.

Ladies Final: Chrissie wins another hole to keep Ger within her sights, 2up with 9 to play is the Portmarnock player's lead.

Ladies Final: Chrissie wins the 8th hole to bring to back to 3 with 10 holes left.

Gents Final: Great start to the Second 18 for JR Crangle as he wins the first three holes to go 3up on Ray Murphy with 21 played.

Gents Final: JR wins the 16th & 18th holes to draw back A/S with Ray Murphy after the first 18

Ladies Final: Ger Ward maintains her 3up advantage after the first two holes of the Second 18.

Gents Final: Ray Murphy maintains his 2up lead over JR Crangle after 15 holes.

Ladies Final: Ger restores her 3up lead after 18 holes

Ladies Final: A win for Chrissie on the 17th brings Ger's lead back to 2up approaching the end of the first 18.

Ladies Final: Ger maintains her 3up lead over Chrissie after 16 holes

Ger Ward still 3up on Chrissie after 14 holes.

Ray Murphy has brought our Gents Final against JR Crangle back to A/S after 6 holes.

The 12th hole is halved between both Ger and Chrissie as Ger remains 2up however a win on the 13th puts her back 3up.

Ger Ward wins her third consecutive hole to go 3up after 10 holes. However Chrissie responds with a Hole-in-One on the 11th to bring it back to 2!

Gents Final now underway, good start for JR Crangle as he is 2up after 3 holes. 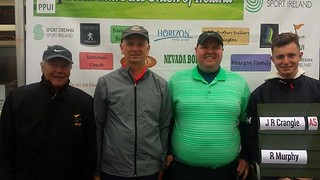 Ger 2up on Chrissie Byrne now after 9 Holes

Ger Ward goes back in front with a win on the 8th hole.

Back A/S as Chrissie's wins the 7th hole over Ger. Gents Final getting underway.

Ger Ward now gone into the lead for the first time after winning the 6th hole.

No change after the fifth between Chrissie and Ger.

Still A/S after the fourth.

Ladies Final underway as Chrissie Byrne wins the first hole and the second is halved between herself and Ger Ward. 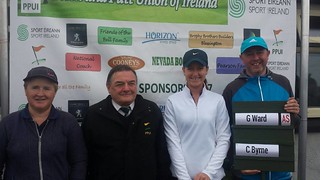 Some photos and videos from this mornig's play are now available on our Flickr page from the link above. (National Matchplay Content Day 3)

Ray Murphy with play in his first Gents Matchplay Final since 2013 after a 3&1 victory over John Walsh. He will face off against JR Crangle from 1pm.

Ray Murphy closing in on making the Final as he leads John Walsh by 2up with 3 to play.

Our Second Ladies Finalist is determined as Ger Ward defeats Martha O'Brien 2&1 to set up a first decider with Chrissie Byrne since 2010 which incidentally enough was at another Tipperary course in Larkspur Park!

JR Crangle now 3up with 4 to play on Bryan Delaney!

Ger Ward now 2up with 3 to play on Martha O'Brien

A/S now between John Walsh and Ray Murphy with 9 holes left to play!

Our first Ladies Semi-Finalist is confirmed after a 6&4 victory for Chrissie Byrne over Tara Dillon, her opponent is still undetermined as Ger Ward goes 1up on Martha O'Brien with 6 to play.

JR moves back to 2up on Bryan after winning the 11th hole.

Ray Murphy's lead over John Walsh is now down to 2up with 12 to play.

JR maintains his 2up advantage on Bryan Delaney with 9 holes left to play.

A birdie for Tara on the 11th brings the match with Chrrisie back to 4 with 7 holes to play.

John Walsh making a bit of a comeback against Ray Murphy, 3down now after 21 holes from a deficit of 5.

JR Crangle back 2up on Bryan Delaney after 24 holes, some exceptional scoring with JR -14 and Delaney -12 thus far.

Ger Ward moves back into the lead, 1up on Martha O'Brien with 9 holes left to play as another biridie for Chrissie has her 5up on Tara now over same distance.

A birdie on the 26th moves Chrissie back 4up on Tara with 10 holes left to play.

Chrissie remains 3up on Tara after 24 holes.

A/S again between Ger Ward and Martha O'Brien after 24 holes.

Ray Murphy turns 5up on John Walsh after the first 18.

Tara wins the 22nd and 23rd holes to bring the deficit back to 3down.

Ray Murphy remains 4up on John Walsh after 15 holes.

Martha O'Brien back in front, 1up on Ger Ward after 21 holes.

Another win for Delaney on the 18th brings JR's lead down to 1up after First Round.

Bryan Delaney wins the 17th to move back to 2down on JR.

JR now 3up on Bryan Delaney after 16 Holes as Ray Murphy moves 4up on John Walsh after 12 Holes.

A/S through 18 holes between Ger Ward and Martha O'Brien as Chrissie Byrne's lead over Tara Dillon is 3up over same distance.

Ray Murphy still 1up on John Walsh after 9 holes.

Chrissie 2up on Tara again after 17 holes.

JR now 3up on Bryan Delaney after 12 holes.

Chrrisie back 1up on Tara after 15 as Ray Murphy is 1up on John Walsh after 6 holes after both players were level through 3 holes.

Both Ladies matches are now A/S. Ger and Martha are gone through 15 holes while Tara has just birdied the 14th to go level with Chrissie.

Chrissie had a 2up lead over Tara after 12 holes but Tara is just after getting a Hole-in-One on Tara Dillon to pull 1 back!

JR goes 2up on Bryan Delaney after 9 holes.

A/S between Martha & Ger in the first Ladies Semi-Final

Chrissie stays 2up on Tara Dillon through 9 holes

John Walsh and Ray Murphy have just teed-off in our second Gents Semi-Final.

Bryan 2up on JR through 3 holes.

Martha still holding a 1up lead on Ger through 9 holes

Chrissie goes 2up on Tara after 7 holes.

Bryan Delaney takes an early 1up lead on John Ross Crangle in our first Gents Semi-Final.

Chrissie goes ahead of Tara now after 5 holes 1up.

Still level between Chrissie and Tara through 4 holes.

Martha now 1up on Ger after 6 Holes

Level between Chrrise Byrne and Tara Dillon through 2 holes.

Martha responds by winning the second to level the match. Chrissie and Tara just about to tee-off.

Ger wins the first hole against Martha to go 1up

Ger Ward and Martha O'Brien just about to tee-off.

Nearly set to go on the Final Day in Tipperary Hills 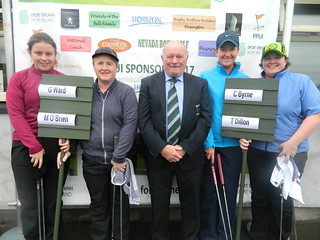