73 pairings compete for the two Provincial Mixed Foursomes titles this Sunday in Lucan (Leinster) and Tralee (Munster). Communications & Press Officer Jason O’Connor takes a closer look at the field in this preview. 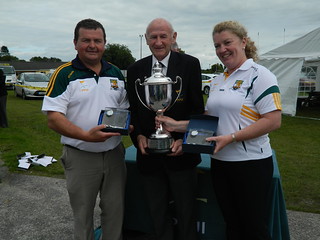 One of the other prize-winners from last year in Longford is also in action this Sunday as last year’s Gross winners Christine Byrne and Darren Keogh tee-off in the shotgun start. 2014 National winning pair Catherine McCreevy and William Sheridan take part this Sunday as well, William entering off the back of his win in the National Seniors Strokeplay in Fermoy last month. Kilbeggan duo Dina Carton and Mick Cunningham were the only Leinster prize-winners at last year’s national event in Collins while 2013 Leinster winners Mary Farrell and Martin O’Reilly from Gaeil Colmcille are also teeing off in this event. Old County and Glenville are the only other Dublin clubs with pairs competing on Sunday, three for the former and one for the latter.

Kildare also has four representatives with Mary & Liam Sherry, Ann & Christy Sweeney along with Mairead O’Toole and Christy Hannon joining Byrne & Keogh with Louth and Offaly having three pairs each in the field. Seapoint’s Mary & Barry Coyle and Margaret McCabe & Brian McGinn along with McBride’s Audrey Donnelly and Padraic Sarsfield make up the Louth pairs while there are two pairs from Ferbane to join last year’s winners namely Mary McKenna & Sean Buckley along with Mary Sheerin & Patsy Reamsbottom.

Play will get underway at 10.30am on Sunday morning in Lucan. 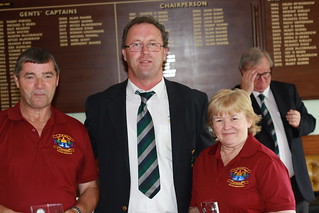 27 pairs will compete on Sunday in Tralee with the host club having three pairs entered with all three out with pairs from the Lakeside club in Templemore. Most prominent of those pairs is Lisa O’Connor & Tony Blake, winners of this competition in 2014 and runners-up in last year’s National Competition in Collins. They tee-off alongside Josie McCormack and this year’s Munster Junior Matchplay Runner-Up in Anthony Maher. Brother and sister Charlotte & Jamie Blake find themselves teeing off with the defending champions in Bridget Shelley & Joe O’Connor while the other Tralee pairing of Aisling Quirke & Dan O’Leary tee-off with Mary & Patrick Quinn from the Templemore club.

The other Lakeside pairing of Elaine Quinn & Mick Fennell were winners of the First 18 prize at the national event last October and they tee-off alongside Deerpark’s Sheila O’Donoghue & Robbie O’Brien Snr. The other pairing from the Killarney club Johnny & Betty O’Brien tee-off with Castlelyons duo Deirdre & Padraig Fitzgerald. Cunnigar have three pairs involved on Sunday with two prize-winners from last year Liam Simms and Aidan O’Rourke having new playing partners in Jacinta O’Mahony and Marie Forde respectively. Mary Walsh & Paddy Noonan complete the representation from the Dungarvan club as Rocklodge’s double National Ladies Champion for 2016 Mary Murray plays with Garrett O’Mahony on this occasion having won the Gross with John Tracey last year in Lakeside.

As proponents of this format know it’s a tough format that requires a lot of skill and patience to navigate through.

Best Wishes to all pairs in both provinces on Sunday. Updates will be available on the PPUI website from lunchtime when proceedings should be finishing up with the shotgun start element to proceedings.