84 Gents will compete in the National Gents Seniors Strokeplay Championship in Fermoy on Sunday across the three grades. Communications & Press Officer Jason O’Connor takes a closer look at proceedings in this preview. 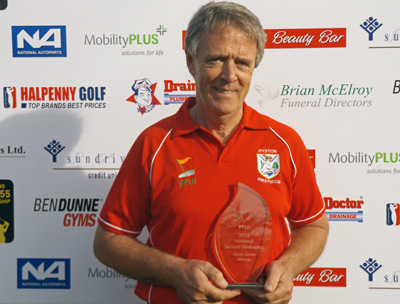 39 Gents will compete for the title this year looking to succeed Ryston’s Aidan Whelan as 2016 winner. Both the second and third place finishers from last year in Old County are in action this weekend namely Bruff’s Joseph O’Riordan and Dutch native Ed Janssen representing Westmeath club Lough Owel in making the trip over from the Netherlands. One unique feature of the grade as indeed with all three grades is the fact that there is no Fermoy player amongst the 84 competitors this weekend with Cork’s six representatives in this field coming from Douglas (Mick Lynch and Barry Murphy), Claycastle’s Seamus Murphy, Collins’ Finbarr Looney, ESB’s Tony Budden and Majestic’s Liam Farrell.

Interesting the county with the most representation amongst the field is Westmeath with eight as Lough Owel duo Karl Gattinger and Martin Verbeek, Collinstown’s Willie Ayers and Kevin Flanagan, Kilbeggan’s John Clarke and Tom Crowe along with Rochfortbridge’s Charlie McHugh join the aforementioned Janssen. There are two players making the long journey down from Cloghogue in Newry with in the form of Denny McGuinness and John Green with Cunnigar’s Paddy Noonan (a former PJ Bell winner) making a much shorter trek from Dungarvan to Sunday’s venue. Lakeside’s Anthony Maher is one to watch having contested the Munster Junior Matchplay Final on his home course back in May.

Dublin, Meath, Offaly and Kildare some of the other counties to have representatives in the grade this weekend as a 10am Shotgun Start will get proceedings underway on Sunday. 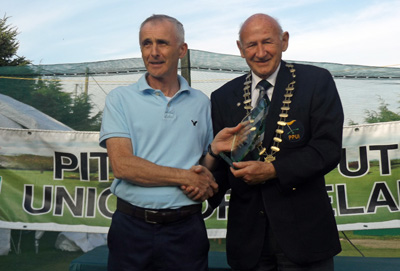 27 players will bid to succeed Erins Isle’s Anthony Carroll as the 2016 winner with just like the Junior grade, the second and third place finishers from Old County involved this Sunday. Christy Hannon of St Bridgets defeated Kilbeggan’s John Feery on countback for the runners-up spot last year and what’s interesting about the two players is that they are paired in the same three-ball on Saturday alongside a former winner of the event in Raffeen Creek’s Weeshie Murphy who won the grade the last time it was held in Cork in 2012 at Collins. The player who succeeded Weeshie as winner in 2013, John Carton of Kilbeggan, is also in action as he tees off alongside ESB’s John Moloney and Athgarvan’s John Redmond.

2014 winner William McNally of Stackallen is also entered this weekend as he tees off alongside Clare Road’s Billy Griffin and Erins Isle’s Charlie Egan. A former winner of the Senior grade also tees off in this grade on Sunday as Old County’s Christy Broe looks to add to his 2010 victory in Lakeside. He tees off alongside former PJ Bell winner Sean Robinson of Ferbane and Ballinlough’s Hugh Cooney. Cork interest in the event sees six other players alongside the aforementioned Cooney and Murphy. They are ESB trio Arthur O’Farrell, Benny McCarthy and John Moloney, Collins’ Jim Aherne, Rocklodge’s Des Quinn and St Annes’ George Mulcahy.

Tipperary Hills’ Ray Lyons is the sole player from the Premier County in the grade as the Intermediates will tee-off alongside the seniors in a 1.30pm Shotgun Sart on Sunday afternoon.

18 players will bid for the title with Lucan’s Anthony Malone the only Gents Champion returning to defend his title from Old County. Malone is looking for his third win in this grade after 2013 and 2015 successes with Malone finding himself out alongside another two time winner in Seapoint’s Pat Greene (2006 and 2008) as well as Tullamore’s Michael Byrne. Two former winners are also paired in another three ball as 2014 winner William Sheridan of Bellewstown tees off with Athgarvan’s Frank Ryan (2007 winner) with Glenville’s Frank Connolly making up that three-ball.

There’s never been a Cork winner of this event since its inception back in 2004 with Marty Fawl of Clare Road’s win on home turf the only time a Munster player has won this grade. ESB’s John O’Gorman and Raffeen Creek’s Barry Morrissey carry the county’s hopes this Sunday with Bruff’s Pacelli Darcy, Patsy Farrell and William O’Donovan the Limerick entries this weekend. Two interesting players to look out for this weekend include Ryston’s Sean Harkins along with Riverdale’s Sean Minogue. Harkins tees off with Lucan’s Christy Kane and Erry’s William Buckley Snr while Minogue tees off with both Old County’s Kevin Bermingham and Farrell.

Portmarnock’s Davy Poole tees off with both O’Gorman and O’Donovan while former National Mixed Foursomes winner Dennis Monaghan from Shandon completes the field in teeing off with Barry Morrissey and Darcy.

Should there be a tie for the winner of any of the three grades after the regulation 36 Holes a nine hole playoff for the title will ensue afterwards.

We wish all players this weekend in both the Ladies and Gents grades the very best of luck. Updates will be available on the PPUI website over the course of both days on proceedings.