Click on the Links below to see the latest on the National Matchplay Draws:

Following the International Trial in Portmarnock today the following is the Team to represent Ireland at the World Cup in Andorra.

Eamon Gibney (Castletown) finished on 25 under

THE draws for the 2016 National Ladies and Gents Matchplay Championships have thrown up some interesting ties. Communications & Press Officer Jason O’Connor runs over some of the main ones below. 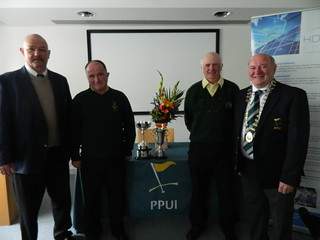 JOHN Walsh has been handed quite the beginning to his quest for a third consecutive Day Cup as he will have to face reigning Irish Open Champion Eamon Gibney from Castletown in the first match at Seapoint on the June Bank Holiday Saturday. Six time National Matchplay winner Ray Murphy has another tough First Round encounter facing recently crowned Leinster Senior Matchplay Champion Ian Donnelly of Cement in the top half of the draw. Also in the first section of the draw Parteen’s Kieran Earls will take on Ronan Callanan from St Annes in Cork.

European Strokeplay Champion Liam O’Donovan will face another St Annes player David Doyle in the second section of the draw while local Seapoint hopeful Pat Greene faces Athgarvan’s Frank Ryan. One of last year’s semi-finalists Eoin Walsh will face McBride’s David O’Brien is his First Round encounter. Former two time winner of the event Cement’s Mark Millar will take on Brian O’Flynn of Clare Road while the winner of the event the last time the event took place in Seapoint back on 2005; Darren Collins of St Annes has a very interesting encounter with Cement’s George Beardsley ahead of him.

Another one of last year’s semi-finalists, John Cahill of Fermoy will play Niall Quigley of Cloghogue in the bottom half of the draw while Cement’s Sean Goggin takes on Aaron O Droighneain of Glenville in his First Round encounter. The anchor match sees Loughlinstown’s John Ross Crangle take on another Dubliner in George McGreal of Old County.

ST Bridgets’ Chrissie Byrne will take on Cement’s Francis Farrell in the defence of her Elvery Cup title in Seapoint. She might well find herself playing her sister Marian Courtney in the Second Round should not only see win but Marian also get the better of Noeleen Bedford from Seapoint. Eleanor Walsh of Fermoy will play Ryston’s Mary Donnelly while Portmarnock’s Sheelagh Elmes takes on Bruff’s Margaret O’Donovan.

Last year’s runner-up Tara Dillon will face Patricia Brennan of Seapoint in the First Round while Jean Cooney of Cement will takes on RGSC’s Ger Holland. Former winner Margaret Hogan of Tullamore will take on Seapoint’s Bridie Hanratty in the bottom half of the draw while Rose Kelly of Ryston will take on another Seapoint player in Concepta Maddick.

Irish No 1 Ger Ward of Portmarnock meanwhile will take on recently crowned Leinster Intermediate Matchplay Champion Siobhan McDonnell of Lucan in the last of the First Round ties.

The draws in full can be seen from the attached links above.