Founded in 1952, it is one of the oldest courses in Ireland.

The course developed from an initial nine holes when it first opened to a full 18 by the end of 1957.  From then on the club went from strength to strength every year.

Having previously rented the course, the club finally purchased the land in 1984. This was done through the dedication and hard work, not to mention the loyalty of the members. At the time, various fund raising events were held, including a mid-winter swim. Brrrrrrrrrr! A new Clubhouse was built in 1993 under the supervision of John Kavanagh, ably assisted by club members, including John Curran, Sean Breen and Paddy Davis, to name but a few.

Seapoint Pitch & Putt Club has hosted every major singles event on the PPUI calendar. In recent years the club hosted the National Matchplay in 2005 and the National Mixed in 2012. Once again the club came up trumps.

The club has produced some extremely talented players.  We have had many club members who have been to the forefront of the game at various different levels, down through the years.  Two of our best had the prestigious honour of representing Ireland on the International stage, Sean Breen and Pat Greene.

We are delighted and honoured to be hosting the National Matchplay 2016 and we are confident our course and facilities will meet with popular approval. We trust our course will provide a suitable test for the Ladies and Gents.

While you are visiting the Wee County, we invite you to explore the tourist attractions of the charming village of Termonfeckin and Historic town of Drogheda.

Location: Turn right opposite the Waterside Inn in Termonfeckin Village, onto the Seapoint Road, continuing on to the end of the road.  There is a car park on the left which is used for club parking.  To get to the course, turn left after the car park and walk along the road between the bungalows to the end of the road.  On the right there is a beach path to the club 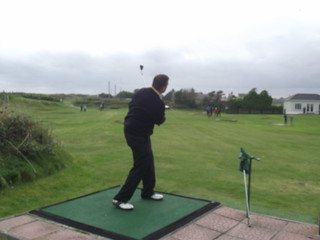 The Course:  The course plays mostly straight out on the first nine and straight in on the back nine.  The wind direction can be hugely significant. The 55m 6th is ranked most difficult on the course.  The player must pitch over a valley onto a sloping green set on a hill. A tee shot finishing short or right of the green will leave a tricky downhill chip.  A deep bunker awaits behind the green, while there is another left of the target. The 59m 16th is considered Seapoint’s signature hole.  A pitch is required across a valley to a raised green guarded front and left by bunkers. Anything short will fall foul of the sand or a slope, which could cost a player up to 10 metres.

Margaret McCabe our first ever lady chair would like to wish all participants the best of luck and enjoy the weekend. 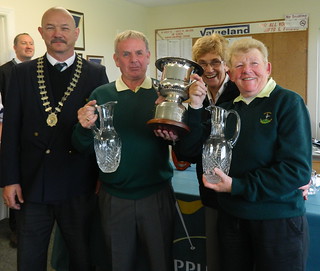 It’s all of 38 years since the National Gents Matchplay Championship was first played on the Seapoint links.  Some atrocious weather and a surprise winner marked that 1978 Matchplay (played on June 4th-5th).  Young left-hander Tony Maley, from the St. Otteran’s club in Waterford, came out on top in a strong field of 32 players.  Seapoint’s Sean Breen reached the Semi-Final, in which he just lost out to fellow Louth player Ray Mathews.  Tony Maley played brilliantly in the Final and ran out a 4&3 winner.

The National Ladies Matchplay Championship was first hosted at Termonfeckin in 1985.  Showing tremendous determination, Geraldine McLernon (now Ward) won her second title with a 4&3 victory in the final over Mary Cronin (Douglas).  Ger thus retained the championship she had won for the first time at Hillview the previous year. National Championship and event wise, it had all started for Seapoint on July 6th 1975.  Gus Carolan (Lucan) retained the Gent’s National Strokeplay title at Seapoint.  Gus’ 94 was two clear of Glenville’s Leo O’Reilly.  Intermediate and Junior winners were Noel O’Brien (Old County) and Jim Byrne (Lucan) respectively.

Seapoint has twice hosted the Inter-County championships.  Louth won the Gent’s Championship on both occasions while Dublin were twice ladies winners. On 11th September 1994, Louth finished with 394 to overhaul the Cork clubhouse target of 399.  Hosts Louth and holders Cork, playing together at the rear of the field on 1st September 2002, tied on 393 for the conventional best four out of five aggregate.  Louth were declared winners on the 5th card. Meath claimed the Division A title, one shot ahead of Waterford.

10th September 1994 was a windy day on the links.  Dublin’s 446 return was three better than Louth.  Dublin romped to a sixteen shot victory in the 2002 Ladies Inter-County championship at the beautifully prepared course. On 31 August, Dublin fired an impressive total of 408 shots to beat Kildare into second place for the second year running. Louth's cumulative +15 score in the Division A championship was four clear of near neighbours Down.

Seapoint hosted the Juvenile weekend on 18th-19th August 2007. Meath won the Inter-County Championship, scoring 407 to head Cork and Westmeath by four strokes.  Girls Strokeplay Champion was Michelle McCarthy (Hillview) on 118.  A play-off in the Boys’ Strokeplay resulted in a win for Portmarnock’s Darragh Rogers who had tied on 98 with Craig Hickey (Deerpark). Seapoint celebrated a home victory in the 2012 National Mixed Foursomes. Concepta Maddick & Gerry Rock (Seapoint) scored +14 to win by two.

Both National Matchplays were played at Seapoint in June of the Millennium year.  21 years old Mark Millar from the Cement club won his first major title with a breath-taking display of Pitch and Putt. Mark was fifteen under par for the 27 holes played in the Gent's National Matchplay Championship final and he beat his Bruff opponent, Pacelli Darcy by 11&9.   Ann Hall (Royal Meath) was two down with five to play in the National Ladies Matchplay championship final but recovered brilliantly to defeat Geraldine Ward (Portmarnock) by 2up.

The National Matchplays were back at Seapoint on June 4th- 6th 2005. Playing in his third Gents Final in five years, Darren Collins (St. Anne’s) defeated Ray Murphy (Templebreedy) by 3&1. Marian Byrne (St. Bridget’s) had taken the title at Deerpark in 2004 and held on to her crown with a 3&2 victory over Portmarnock's Geraldine Ward in a tense ladies final at Seapoint.

Tomorrow: We look ahead to the Ladies Event in Seapoint this weekend.