FOLLOWING their respective victories in the three events on Sunday at the National Inter-County Championships in RGSC, Communications & Press Officer Jason O’Connor spoke to the three winning captains of the winning sides. 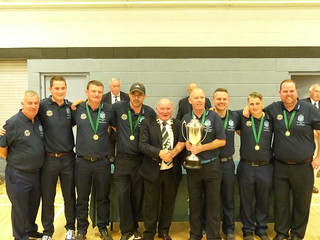 It’s hard to believe it has taken Dublin 17 years to win the Anchor Cup, ‘the last century’ as Junior Smith referred to it in describing the gap back to their 1999 win in Waterford Crystal. However for the RGSC clubman the personal wait goes all the way back to 1983 when he made his debut on the team that won in Navan and featured present Dublin County Board Chairman Anthony ‘Skinner’ Malone. “Being so young at the time I expected that it would probably happen regularly but it was not the case. Personally I’m delighted to have bridged a 33 year gap this weekend and to have done it on my home course makes it that bit more special. Gus Carolan was a great hero and mentor to me at time and I’m happy to take on the elder statesman role now with the players we have coming through even if I wish I had more hair like I did back then!” the Dublin captain said with tongue-in-cheek.

Dublin’s win was forged in the heartbreak of some close shaves since their last win, the 2014 defeat to Cork on the last green in Tullamore probably the most disappointing but Smith said the team always viewed home advantage this year as a possible chance to end the Anchor Cup famine. “We put in a lot of work this year even if we stayed away from the course for the last few days before the event so as to not get caught up in talk about what we had to shoot etc. We worked a lot on the mental side of things especially with the Foursomes format because it is a tough format no matter what you play it in. We are rivals when we played against each other in Singles events but we do come together well when it comes to the Inter-County and I that that showed this weekend,” Smith said.

Was the fact the team didn’t feature amongst the medals in the Leinsters in St Bridgets a source of motivation for the Dubs ahead of the weekend? “Yes we did speak about that after the Leinsters but if you look at our scores they weren’t actually that bad. It was down to how well Louth, Wexford and Westmeath played that day as opposed to anything we did wrong,” he felt about last month’s event. Two of the named counties would feature in the medals (Louth second and Wexford third) in the Nationals with the Dublin captain saying being in contention overnight was the main focus of the side. “After Saturday you just really want to be in the Top Four and see what the scoring is like from there before you start on Sunday. Our focus was to keep control of the things we could keep control of in terms of our own performance. We knew the Foursomes would be tough with everyone coming in cold on Sunday morning but to stay in front was crucial we felt. It got a bit tight in the Singles when Louth drew in on us (three shots the eventual winning margin) but regardless of whether you win by one shot or 10, the result is still the same,” he said.

The win marks a great year for Dublin Gents with John Ross Crangle having featured on the Irish World Cup team, Keith Redmond having won the Leinster Strokeplay amongst the members of last Sunday’s team which also featured Gary Healy, Stephen Murray, Thomas O’Reilly and Smith. Team substitute Paddy Noonan’s contribution was recognised during the presentation with Eoin Mithen and Malone the team selectors. Looking ahead to Ryston next year Smith said a successful defence would be a target but expects the competition to be tough from the other counties.

“Geographically Ryston is probably a course that would suit us in terms of getting preparation in but we know that we will have to work hard if we want to retain it because there are a lot of other counties out there anxious to win it and we have no divine right to win it every year.” 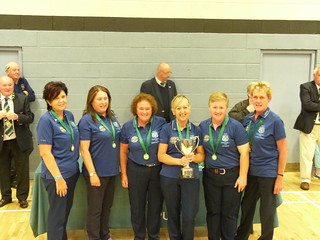 While the Dublin Ladies haven’t had quite the famine compared to their Gents team prior to last Sunday, they certainly were anxious not to let a chance for success on home turf slip them by in RGSC last weekend. Siobhan Keely was a member of the last Dublin side to win the event in Portmarnock back in 2011, her first Inter-County medal but victory on her home course was pretty special. “I’m delighted to be captain here for it in my own club especially for the amount of work that was put in both on and off the course by the committee. To have half the team being from the club makes it all the more special and I’m delighted for both Ger (Holland) and Glenda (Hoey) to have won their first inter-county medals,” the team captain said.

When it came to the event itself, Saturday’s Scotch Foursomes saw it essentially boil down to a battle between the Dubs and Kildare. With a six shot lead Siobhan said the team were taking nothing for granted. “We were a bit nervous because we knew nothing had been won at that stage and that we had to pick up from where we left off on Saturday but to hold onto the lead approaching the back nine was a big confidence booster,” Siobhan said. Three under from Ger Ward and level par from her Portmarnock club-mate Sheelagh Elmes were crucial in seeing Dublin over the line by 11 shots in the finish from the Lilywhites and continue a run that has seen no county retain the title stretching back to 2009 in Cloghogue when Dublin broke Kildare’s then stranglehold on the Vaughan Cup.

Siobhan paid tribute to the efforts of the team’s most regular starters over the recent decades namely Ward (a 14th Inter-County success), Elmes (a 12th Inter-County medal) and Maree O’Toole (her eighth medal). “They’ve given great service to the team down through the years and we practiced a lot in advance of this so we are thankful we got our reward. Ryston will be difficult next year being in Kildare but if the team works hard enough then I think we won’t be too far away.”

Indeed trying to become the first county in eight years to retain the title and win outside of home turf in the process should be an interesting enough carrot for them when it comes to September of next year. 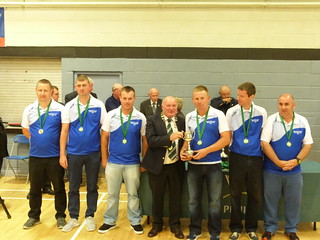 They were pushed all the way in the defence of their title but Waterford came good in the finish to claim the Eamon Birchall Cup for the second time in its three year history. Taken with a second place finish in the Munsters in Tramore it’s been a very good year for the Decies as team captain Brian Farrell spoke after their win. “Our two results this year have been fantastic. We had to make two changes from the team for the Munsters with Noel Farrell and Stephen Costello coming in for John Carroll and Kevin Kirby but the lads performed well over the weekend,” Farrell said.

With no practice on the RGSC course prior to Saturday, Waterford had to learn about the track as they went along but Farrell agreed that Longford did surprise them with their performance over the weekend. “On previous years you would probably have expected Clare to be our main threat but Longford played well throughout the weekend in fairness to them. We didn’t panic when they went ahead of us overnight or even before the Singles because we still felt we had the scores in us to win it,” he said. Five under par from Eddie Hennessy in the closing singles and four under from Daniel Sullivan were the key scores in turning the competition in their favour in the finish as along with Sean Hennebry the team won by a total of 13 shots in the finish.

Turning to the future Farrell feels that the competition is of a big boost to the game in the county. “It gives us a chance to succeed and develop that we probably wouldn’t get in the A Division so we are happy with the position that we are in at present.”

What RGSC told us (by John Manning)