The present RGSC course at Kingswood has hosted a number of National Championships and events. Previously, the old RGSC course on the Belgard Road hosted three national championships as well as a specially staged for TV event 33 years ago. Here's a brief step through its history.

RGSC Pitch & Putt club, or Belgard as it was initially known, was founded in 1968 as a sub section of the Roadstone Sports and Social Club for staff of the company. The vast bulk of the members in the early years were Roadstone employees but the company’s staff numbers reduced with the passage of time. Nowadays, non-staff or associates form the lion’s share of the membership. The original RGSC course was laid out in the grounds of Belgard Castle on the Belgard Road. It was rightly considered one of Ireland’s best. It boasted a wide variety of shots over a wide area, which made maximum use of the many mature trees on site.

In the mid-1990s, the company decided that the Roadstone Sports and Social Club should be relocated and a new state of the art facility was built at Kingswood, just off the N7 near Clondalkin. The term state of the art referred to the buildings that house the bar, function room and games hall etc. but not necessarily the Pitch & Putt course. The RGSC Pitch & Putt members received the consent of the Roadstone Sports and Social Club Executive to craft a course themselves on what was essentially a ploughed field. Under the tutelage and leadership of Seamus Gaffney (RIP), a willing band of volunteers cleared the site and began the process of constructing a course from scratch.

On two separate occasions, the new RGSC course had to be drastically re-shaped due to road building and social club requirements but gradually a layout emerged to equal what R.G.S.C. members had enjoyed previously. It stands today as a tribute to the resilient and resourceful group that brought it to fruition.

Trees, shrubs, bridges and the feature stream all contribute to an interesting and challenging test. RGSC is now justifiably considered one of the best around. Ample parking, ease of access, the proximity to the national road network and a hotel close by all make for an optimum championship venue. 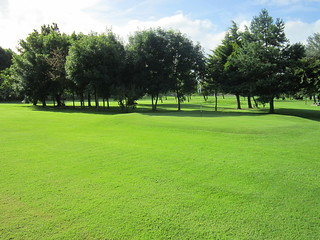 Mildred Doyle won the second of her Ladies Matchplay titles.  In a repeat of the 1978 final, the Shandon player was crowned champion for the second successive year, beating Margaret Hogan (Clara) 3&2.

Glenville's Peggy Campbell (RIP) survived a mid-final round crisis to post a 12 under par aggregate of 150 to retain her title and win the National Ladies Strokeplay championship on a sun splashed Sunday July 14th. Peggy thus became the fifth player in history to win the National Ladies Matchplay and Strokeplay titles in a single year.  It was also Peggy's third national title in a row - a year previously she took the Strokeplay in record breaking fashion at Glenville.  Peggy looked to be on course for victory when she birdied three of the opening six holes of the final round to move three clear of the field.  However, she fluffed a chip at the tricky ninth to run up a double bogey, falling back to -8 and allowing the likes of Marian Byrne, Ann Hall, Ger Ward and Maree O'Toole back into the hunt. However, four birdies in six holes from the 12th put Peggy back in control and a superbly played explosion shot (from the back bunker) to save par on 18 gave the Glenville ace a three shot cushion.

Birdies at the closing two holes gave Maree O'Toole (Shandon) second spot on 153 - nineteen years on from her previous runners-up spot in this championship, at Lakewood in 1983.  Maree chipped-in at the 17th and holed a fast putt down the length of the 18th to overhaul playing partner (and 1999 champion) Marian Byrne. Marian was then edged out of third spot by a fast finishing Ann Hall (Royal Meath), the 1993 champion, who was runner-up in 2001. Ann pitched to within inches of the home hole to tie Marian on eight under. The Royal Meath player's 50 for the final round gave her third spot on the tiebreaker.  Marian Byrne (fourth for the second consecutive year) was exempt for the 2003 championship.

In a tightly packed field on a superbly prepared course, Peggy Campbell held the 36 hole lead on 101 (-7), just a shot ahead of Geraldine Ward. The pair played in the final group of the Strokeplay for the second successive year

36 hole leader Jean Fallon from the host club R.G.S.C. coolly held on to win the Intermediate Strokeplay championship by four shots from final round playing partner and club-mate Joan Doyle.  Jean laid the foundation for success with consistent opening rounds of two under par 52 for a -4 36 hole total of 104, five shots clear of Joan Doyle.  A carefully played final 18 of 58 gave Jean an even par aggregate and a four shot win.  Kathleen Grendon (Rathfeigh) holed a birdie putt across the final green to take third.

From the time she carded a 55 second round during the morning 36 holes, young June Walsh (Ashgrove) was the dominant force in the junior championship.  That 55 gave June a total of 114 and a five shot 36 hole cushion. By the end, the Waterford youngster had seven shots in hand over another young player, Audrey Smith (Collins). Cork Strokeplay champion Linda O'Donovan (Douglas) returned 188 for third spot.

National Strokeplay Champion on 138 was Ray Murphy (Templebreedy). Ray returned 45, 46 and 47 for a 24 under par aggregate and finish just a single shot clear of Derek Courtney (Glenville). Third on 140 was James Carroll (Castletown) while Sean Goggins (Cement) placed 4th on 141 (who won a tiebreak verdict over Collins’ Eoin Shannon).

Darren Quirke (Fermoy) won the Intermediate on 152. Second was Colm Ward (Loughlinstown) with 153.  Declan McConville (Cloghogue) closed with a 49 to beat Larry Maher Snr (Erry) for the bronze medal on the back 18 tiebreaker. The Junior Championship went to James Farrell (Woodlands) with 159, two ahead of Shane Hickey (Deerpark). Third on 162 was Patrick Joseph Ryan (Riverdale).

The National Gents Strokeplay championship returned to R.G.S.C. five years on. The Senior Championship was a hugely exciting affair with many players having a chance over the final round.  In the end it was a Kerry 1-2. Jonathan Goodall (Tralee) fired 46, 44, 47 for 137 and a one stroke verdict over Damien Fleming (Deerpark). With a closing 46, Damien took second on the last 18 from Philip Byrne (Glenville). Fourth on the final 18 with a 46 was William Buckley Junior (Erry) from Ray Murphy (Templebreedy), Chris Scannell (Collins) and Junior Smith of the host club.

Intermediate Champion was Daniel Clinton (Cement) on 152.  Three players tied on 154. James Devonshire (Fermoy) was second on final 18 (49) from Ian Leech of St. Anne's (52).  Tom McMorrow (Lucan) lost out on 56.  The Junior Championship was won on 153 by David O'Mahony (Drimoleague), which left him three ahead of Dylan Loughnane (Lakeside) and Timmy Murphy (Kilshannig). 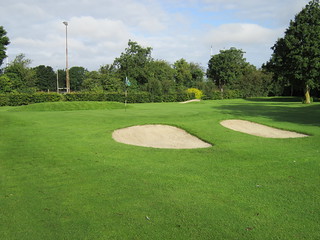 The final result at RGSC was 30.5 to 9.5 so Ireland retained the Willie Parker Challenge Cup. Ireland won the closing set of Sunday foursomes by 4-1, Patrick Luning and Rolf Kwant again supplying the Dutch point with a one hole win over Sean Downes and Ian Farrelly.

Ireland increased their lead after the Sunday morning Fourballs. Patrick Luning continued his winning ways when he and his partner Rolf Kwant defeated Irish pair Derek Courtney (the winning captain) and Sean Downes 6 & 4. However that was Ireland's only loss. Ian Farrelly and Paul O'Brien had an easy win over Lennart Swennenhuis and Henk-rik Koetsier by 7 & 6. The all-lady combination of Ger Ward and Tara Dillon beat Karl Bergh and Jenno Wolters 3 & 2. Sean Goggin and James Carroll along with Ray Murphy and Frank Dineen had matching 4&3 wins to increase Ireland's lead to 19 - 6.

At the close of day One at RGSC, Ireland held a healthy 15-5 with twenty more points available on Sunday. A 5-0 home win in the afternoon foursomes appeared to have given Ireland an unassailable lead. The Dutch had threatened to make it a very close finish when they took four of the Saturday singles. Patrick Luning beat Ireland's No. 1 Ray Murphy. Another member of Ireland's World Cup winning trio Paul O'Brien fell to Lennart Swennenhuis. Henk-Rik Koetsier defeated the winner of Friday's Willie Parker Challenge, Sean Goggin while Rolf Mulder just edged out Geraldine Ward.

Ireland led by 4 matches to 1 after the Saturday fourballs. Rolf Kwant and Patrick Luning were the only Dutch winners, defeating Dubliners Derek Courtney and Geraldine Ward by 3&2 in the top match.

Overnight leader Frank Dineen duly won the Irish Open at R.G.S.C. but he was made to fight all the way by fellow Irishman Stephen Murray of Old County (who had trailed Dineen by five overnight). Stephen Murray fired a fabulous closing round of six under par 48 to post the clubhouse target of 148 for the three rounds. 2008 Irish Strokeplay champion Frank Dineen was not playing as well as he did on Saturday (when he scored 95) and was one shot behind with one hole to play. The St. Anne's ace pitched to within four feet of the final hole of the regulation 54 and calmly slotted the birdie putt to force a play-off. Stephen Murray held the early advantage in that three hole play-off. Frank bogeyed the first, having chipped too strongly. Inexplicably, Dubliner Stephen Murray missed from inside two feet for par at the second and the pair were level playing the last. Frank pitched close and made the birdie putt for a famous win.

Paul O'Brien also closed with a fine 48 to place third on 149, one out of the play-off. On a showery, if reasonably warm Sunday, Tralee's Jason O'Regan shot a final round 48 to clinch fourth slot on 150, just ahead of O'Brien's Tipperary county colleague, Brian Webster, who also returned 12 under for the three rounds. Britain's John Deeble was best non- Irish player on 154. Chrissie Byrne made it two Irish Ladies Opens out of two. The St. Bridget's star closed with a 53 for a five under par 157 aggregate. That was good enough for a four shot win over her Irish colleagues, Tracey McGrath and Geraldine Ward. The then current Irish Strokeplay and Matchplay champion Tracey McGrath secured second place by virtue of her superb final round 49.

Tomorrow: We look ahead to the Gents B and Ladies events this weekend