A LONG year of travelling around the country coupled with some close and exciting encounters to get here will come to an end tomorrow as the 2016 National Gents Inter-Club Finals will be down for decision in St Bridgets with the Semi-Finals and decider being played. Communications & Press Officer Jason O’Connor takes a closer look at proceedings in Kilcullen in advance. 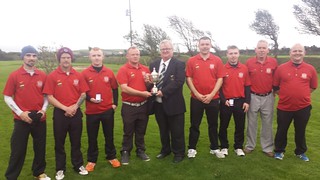 Despite the event being held on a Leinster course only one team from the eastern province is in action on Saturday and it is Cement of Louth who find themselves coming up against one of last year’s semi-finalists in Parteen. Cement have been pretty strong in making it to this point, beating fellow Louth club in their first match 6-3 before having a strong 8-1 victory over Lough Owel in their second match. After drawing their final group game with St Bridgets they went on to hammer last year’s winners in Collinstown of Westmeath (7.5 to 1.5) to enter the final day on a high.

Captained by Keith Cluskey, John and Owen Brannigan, Colin Campbell, Gel Martin, Kieran McDonnell, Darren McKenna and Alan McLernon make up their squad as they face a Parteen side eager to make up for their defeat to Bagenalstown in last year’s semi-finals. Former National Junior Strokeplay Champion Alan Bennis, this year’s Munster Junior Matchplay winner Conor Fahy, Tommy Fennell, Ger Keogh, Che Maher, Brian Mason Ger Roche and Patrick Ryan make up the side as they had a 100% record in making it to this point. An 8-1 win over Tipperary Hills 1 got their campaign underway before they defeated Tralee away from home 6-3 and concluded the Group Stages with a 5-4 win over Riverdale on home turf. Then in the Quarter-Finals they had a 7-2 win over Cunnigar in St Annes to make it to Finals Day for the second year-in-a-row.

The second semi-final is between Deerpark and Tipperary Hills A with the latter like Parteen beaten semi-finalists in 2015. The Killarney club lost out in the decider of the inaugural event in 2013 but are back in Finals Day for the first time since following wins over Fermoy (5-4) and Collins (6-3) before losing out to St Annes in their final group game. They still qualified for the knockout stages however and only booked their place here last weekend when they beat Tullamore at the venue of their opponents tomorrow, Tipperary Hills A. James Fleming, Kieran Fitzpatrick Brian Moloney, Noel Moynihan, John O’Brien, Aidan O’Keeffe and Jason O’Sullivan make up the side. Tipp Hills’ side is made up of Michael Brennan, John Hanley, DJ Lynch, Ray Lyons, Paul Malone, Michael Morrissey, Richard Swords and Eddie Tuohy and they came through a three team group that saw them having to face Clare Road and Bruff twice.

The two games against Clare Road were different encounters, one an 8-1 win, the second a 5-4 victory while a 6-3 win over Bruff and a draw were enough to send them into the knockout stages as group winners. Gowran of Kilkenny were their opposition in the Quarter-Finals, an encounter they won by 6-3 to send them back to Finals Day. 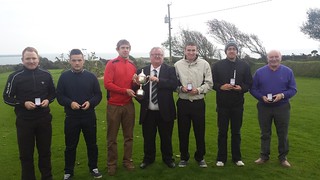 Four sides from Munster head up the M7 and M8 motorways for the conclusion of this event with two time winners St Annes looking to regain the title they relinquished last year in Tramore. They lost out to eventual winners St Patricks in last year’s semi-finals having won the first two stagings of the competition in 2013 and 2014. They returned this year, coming through a three team group featuring Collins and Fermoy. Beating Collins in both their encounters (5-4 in each game) effectively sent them through to the knockout stages after losing one (7-2) and drawing the other of their meetings with Fermoy.

As fate would have it they met St Patricks in the Quarter-Finals in the exact same venue that they went defeated in last year with the Cork club coming out on top by 5-4. Captained by John O’Sullivan this year, the team contained many of the usual faces in recent Irish Open winner Frank Dineen, Ray Murphy, Darren Collins, Kieran Dunscombe, Liam Myers, Ronan Callanan and David Doyle as they face a Deerpark side who have reached the last four of this event for the first time. With Damien Fleming at the helm, the team features the club’s other National Matchplay winner in Derry McCarthy, one of only five Kerry players with an Anchor Cup medal in Sean Kelly, four former National U-16 Inter-County winners in Michael Foley, Conor McCarthy, Jason O’Brien and St John Kelliher along with John McGrath.

Big wins over Majestic in the Group Stages (7-2 and 8-1) effectively sent them through despite a 6-3 loss to Bruff and a draw with the Limerick outfit in their other games. The club succeeded over Collinstown 1 in the Quarter-Finals, a 5-4 win in Tipperary Hills sending them through to tomorrow. The other semi-final is a repeat of one of last year’s semi-finals as Bruff and Fermoy renew battle from a great contest in Tramore last year which the Cork club came out on top in. Fermoy are strengthened this year by the inclusion of Bryan Delaney in their ranks as the team is captained by David Sexton and also features John Cahill, Conor Clancy, Darren Duffy, Declan Freeman, Wayne Galvin and Daniel Keohane. The team had the distinction of a going through the Group Stages undefeated, 5-4 wins in both their matches with Collins, a 7-2 success over St Annes and a draw in their other match with the latter sending them through to a quarter-final meeting with Tullamore in Enniscorthy.

They won out by 5-4 again to make it here with Bruff’s path to this rematch pretty impressive also. They defeated Deerpark 6-3 in their first match, had a bit of a fright in their second match with Majestic only winning by 5-4, looked a lot more convincing in their second match with the Mallow club winning by 8-1 before a draw with Deerpark in their second encounter. Like Deerpark they face a Collinstown team in the Quarter-Finals, this time the A named team from the Westmeath club and they had a 7-2 victory in Lakeside to make it to the semi-final stages once more. Led by Pacelli Darcy, the team features National Strokeplay Champion Liam O’Donovan, Michael Darcy, Patrick and William Farrell, Thomas Hanley, Martin Keohane and Brian Webster as they hope for a maiden success in this event.

By its very nature it promises to be an exciting day in both competitions tomorrow. With players of various different abilities fighting out for a win for their club, it will be a great test of all concerned.

We wish all eight teams in both competitions in St Bridgets tomorrow the very best of luck. Updates will be available on the PPUI website throughout proceedings.