WHILE unfortunately there are no Ladies competitions in Munster this year, there is action in all three Gents grades in both Lakeside and Riverdale this weekend as Communications & Press Officer Jason O’Connor takes a closer look in this preview.

BEFORE we look at the three grades in closer detail, one interesting element to the action this weekend is the use of a ‘Shotgun Start’ across all play up until the semi-final stages. It will be interesting to see what sort of effect (if any) such a system has on the outcome of matches. All grades have an increased entry of 32 well, meaning double the number of possibilities from last year’s action. Play will also cease at the Quarter-Final stages on Saturday, as opposed to the usual semi-final stage in other years. 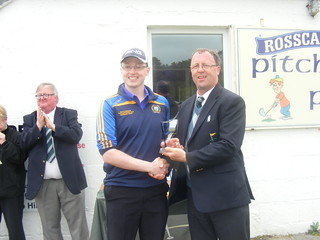 WITH a view back to last weekend’s PJ Bell Competition at the same venue some of the prize-winners from that event are in action here. Michael Aherne from the winning Cunnigar team returns to Templemore this weekend looking for individual honours as he faces Tralee’s David Hobbert in the First Round. Should he win that encounter he might find himself playing another prize-winner in the form of Riverdale’s Seamus Gleeson but that depends on Seamus getting the better of Rocklodge’s Martin O’Sullivan in his First Round encounter of course.

With six players in this grade, Tipperary Hills have the most competitors of all and two of them face off in the First Round in the bottom match as John Hanley takes on Eddie Touhy. Ray Lyons takes on Adrian Anglim from the Hillview club in Clonmel while another player in the bottom half of the draw from Tipp Hills, William McGrath, takes on Paul O’Shea from Tralee. In the top half there is another Tipp Hills vs. Tralee encounter as Charlie Compton takes on Roger Guthrie while the other Tipp Hills player, Richard Swords, takes on PJ Ryan from Bruff. Hopes for the host club will be with two players namely Mark Cahill and Anthony Maher. Maher was on the team that finished runners-up in last weekend’s PJ Bell and he faces another PJ, Considine, from Clare Road in the First Round.

Mark Cahill plays Parteen’s Conor Fahy in the other half of the draw as the latter’s club have five players in total amongst the field. Ger Keogh plays St Annes’ Richard Kelliher with the potential for an all club affair in the Last 16 should he win that encounter and club-mate Tony Cusack should Cusack manage to get the better of Tralee’s Tim Scannell. A second Parteen vs. Tralee match in the First Round sees Patrick Ryan take on Aidan O’Sullivan while down near the foot of the draw, Kieran Hogan takes on a new players amongst the adult ranks in Raffeen Creek’s David Howard.

Tralee have the distinction of having all of the Kerry representatives in this grade with Patrick Byrne taking on Clare Road’s Brian O’Flynn while Bruff have two representatives, Michael McGuane and Michael Farrell, the latter taking on Bishopstown’s Colm O’Connor. 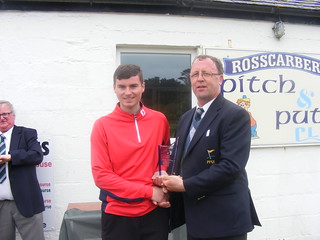 THOSE in this grade aspiring to reach the latter stages must contend with two different courses in their pursuit of that ambition with all Saturday’s play in Riverdale before transferring over to Lakeside on Sunday for the Quarter-Finals onwards. After winning the Junior version in Rosscarbery last year, Riverdale’s John Minogue has the added incentive of home advantage for the first day of the event, taking on Lakeside’s Alan Maher whose incentive is to get to the closing stages on his home course the second day! Sean McCormack is the other player from the Templemore club in this grade and he faces Tralee’s John Fitzgerald in the First Round.

There are two other Riverdale players amongst the field, Dean Courtney facing former National Junior Gents Strokeplay Champion Parteen’s Alan Bennis in the top half of the draw, while also in the top half of the draw Paul Shoer will take on Collins’ Frank O’Brien. One other throwback from the Junior competition in Rosscarbery last year is the presence of the player John Minogue defeated in last year’s Final, Sean Murphy of St Stephens, as he takes on Aidan O’Rourke from Cunnigar. One of Murphy’s St Stephens club-mates in Peter O’Donovan is also in action this weekend as he takes on Michael Morrissey of Tipperary Hills but most of the Cork interest in the event is likely to centre on the four Douglas players entered. Two of them face off against each other while the other two face Cork players to give it a real Rebel feel.

Mark Crean vs. Conor Irwin is the all Douglas encounter while their club-mate Shane Neiland takes on Craig Cahill from Rocklodge. The other Douglas player, Shane Madden, faces Eric O’Shea of St Annes while another Cork player in Paul Collins, one of last year’s beaten semi-finalists in this grade, takes on John Paul Mullally from Tipperary Hills. The other beaten semi-finalist from last year in Rosscarbery is also in action as St Annes’ Martin O’Sullivan faces Clare Road’s Niall Seery in the top half of the draw. Continuing the Tipperary Hills vs. Tralee theme from the Junior Grade, Johnny Martin will take on Alan Hobbert in the First Round while Martin’s club-mate DJ Lynch will take on Damien Long of Collins. There is one all Kerry tie in the form of Castleisland’s Aidan O’Connor taking on Tralee’s Jason Cregan while there is a Treaty County Board feel to the match-up between Kevin Flynn from Bruff and Che Maher of Parteen.

The match between Cill Na Mona’s Ger Hanrahan and Patrick O’Callaghan of Raffeen Creek completes the First Round line-up in Riverdale. 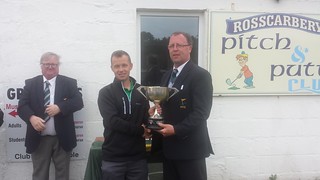 ANY senior draw will always throw up some interesting possibilities and this one should be no different in Templemore this weekend. Take Thomas Hanley’s defence of the title he won last year in Rosscarbery beginning with a match against a certain Bruff club-mate of his in Liam O’Donovan. Or how about John Walsh returning to the scene of his National Matchplay title retention last year with a match against another Bruff player in William Farrell (a former winner of this event back in the year 2000). Another Bruff player in Pacelli Darcy faces a unique challenge in trying to prevent Deerpark’s Jason O’Brien winning a third consecutive Provincial Matchplay title in Munster after winning the Intermediate and Junior events in the last two stagings of the competition.

There is another all club encounter that should generate interest as Ray Murphy takes on Darren Collins in a meeting of former National Matchplay Champions. Local interest will centre on three players in particular. 2005 winner Paul O’Brien finds himself teeing off against another Tipperary player in Michael Kennedy of Hillview in the First Round while club-mates Noel Leahy and Brian Cahill (a former National Junior Gents Strokeplay Champion) face off against Barry Morrissey of Raffeen Creek and Martin Keohane of Bruff respectively. Bruff, with seven competitors, have the biggest single representation from any club in this grade as Tipperary native Brian Webster faces Tipperary Hills’ Anthony Culhane while Patrick Farrell takes on Cunnigar’s John Carroll in the other match of interest to the Limerick club.

Last year’s National Matchplay runner-up at the venue and a semi-finalist in last year’s competition, Bryan Delaney of ESB, returns this year facing Deerpark’s John McGrath in the First Round. The runner-up from Rosscarbery, Pat Martin from Tipp Hills tees off in the anchor match against Noel Collins from Majestic while the other semi-finalist from last year’s event, Kieran Earls of Parteen has an interesting match with Deerpark’s Damien Fleming in the First Round. The match between John Cahill of Fermoy and James Ryan of Tipperary Hills promises to be another keenly fought encounter while the Kerry interest in the event is completed with the match between Tralee’s Tony Blake and Clare Road’s Declan Sheedy, the sole player from the Banner County in this grade. Rocklodge’s Maurice Carey takes on Riverdale’s Sean Minogue in the top half of the draw while the draw is completed with the meeting of Michael Herlihy of ESB and Parteen’s Gus Hayes.

As was mentioned earlier, how the seniors in particular cope with the shotgun start element could be crucial to deciding the eventual winner over the course of the weekend.

We wish everyone travelling to the Provincial Matchplays at our four venues this weekend the very best of luck. Remember to keep track of proceedings via updates on the PPUI website throughout both Saturday and Sunday.