THE year begins at provincial level this weekend with the staging of both the Leinster and Munster Matchplays. We begin our build-up to the weekend with a look at the Leinster events in both Bellewstown and Ringcommons in this piece by Communications & Press Officer Jason O’Connor.

For the Intermediate Gents and the three Ladies grades all the action will take place in Bellewstown, Co Meath this Saturday and Sunday. The Senior and Junior Gents will have to start off in Ringcommons in Dublin first however before moving on to Bellewstown for the closing stages on Sunday.

10 entries have been received for this event which thankfully will take place this year after no event last year. There is one entry from the host club in the grade, Marie Brennan, and she is due to tee-off in the last quarter-final against Francis Farrell of Cement. There are two First Round matches to bring us down to an even eight in the Quarter-Finals Christine Mulvey of Glenville taking on last year’s National Seniors Runner-Up in the Junior grade, Theresa O’Keeffe of Ryston. Wendy Mary Cooney of Cement awaits the winner of that encounter in the Quarter-Finals. 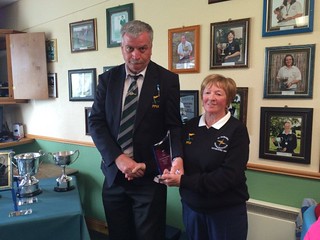 WITH 13 entries there are three byes into the Quarter-Finals and the potential for some interesting matches. Last year’s double Leinster Champion in not only the Strokeplay but also the Matchplay event, Bernie Dunne of St Bridgets, is straight into the last eight and she awaits the winner of the match between her club-mate Mary Sherry and Margaret Delahunty of Royal Meath to see who she will face in the defence of the title.

The lady she defeated in last year’s Final in St Bridgets, Betty Cody, is also into the last eight and she awaits the winner of the match between Esther Martin of Ryston and Iris Cunningham from the host club. In the top half of the draw Siobhan McDonnell gets a bye into the Quarter-Finals and she awaits the winner of the match between last year’s Leinster Junior Strokeplay Champion, St Bridgets’ Catherine Smith, and Noreen Myles of Gaeil Colmcille. In the bottom half of the draw we are guaranteed a representative from the Ratoath club in the Quarter-Finals as club-mates Lily Mulvaney and Veronica O’Neill tee-off against each other while whether or not the club will be guaranteed a Semi-Final spot depends on whether or not Una Brennan can get the better of Gaeil Colmcille’s Carol O’Brien.

One thing we can say for sure is that there will be a player from the Royal County in the last four! 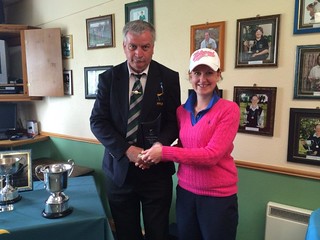 THERE are 19 Ladies entered for this year’s staging as defending champion Chrissie Byrne awaits the winner of the Margaret Hogan vs. Mary Donnelly match in the First Round to see who she will begin the defence of her title against in the Last 16. The lady she beat in the Provincial Final last year, Rose Kelly of Ryston, takes on the lady Chrissie defeated in the National Final last year in Tara Dillon. There are two other First Round Matches in this grade, namely an all Lucan match between Barbara Furlong and Phil Condron while the only from the host club in this grade, Cathy Richardson, takes on another player from Meath in Ann Bird of Laytown.

Marian Courtney awaits the winner of the all Lucan match in the Last 16, the first time she will play a Leinster competition under her married name in much the same way it will be for Tracey Redmond of Erry in the other half of the draw as she takes on Helen Greagsbey of Fairview CY. The winner of the Richardson vs. Bird match will face the returning Liz Quinn of Collinstown in the Last 16 while there are another three First Round matches namely Maree O’Toole of Shandon vs. Mary Agnew of Collon, Linda Thomson of Lucan vs. Mairead O’Toole of Poulaphouca and Mairead O’Brien of Lucan vs. Margaret Keogh of St Bridgets before we can start to think about what the Quarter-Final might look like.

We might see some cracking matches if the players can find form over the course of the weekend. 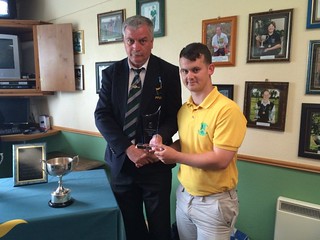 WHILE there will be no home field advantage for any of Saturday’s players with no Ringcommons representative in the grade, the two Bellewstown representatives will have plenty of incentive to make Sunday’s semi-finals with play on that day on their home course. However only one of either Martin Brannigan or Richard Brennan would make it to Sunday as they would be scheduled to meet in the Last 16 should they both win their first matches on Saturday. The other players in their section of the draw will have something to say about that though as Brannigan faces Keith Potter of Glenville in the First Round while Brennan faces another Meath player in Liam Farrell of Gaeil Colmcille.

There is plenty of potential for clashes of club-mates in the Last 16 but the one confirmed clash of club-mates in the First Round is a meeting of St Patricks players Aidan O’Brien and Glenn Fortune in the last game of the top half of the draw. Cement of Louth have a total of five players amongst the field with two of them playing members of the Collinstown club from Westmeath in the First Round. James Donnelly takes on Damian Middleton while Glen Martin takes on Maurice Middleton. Alan McLernon takes on Gowran’s Kevin Knox and he could find himself playing his club-mate Owen Brannigan in the Last 16 should not only he win but also if Brannigan manages to get the better of Ryston’s Stephen Murphy.

The other Cement player, Kieran McDonnell, takes on Paddy Howard from McDonagh in the First Round. McDonagh of course is the home club of last year’s winner of this competition, Anthony Ryan, and there are another two members of the Kildare club along with Howard looking to follow in Ryan’s footsteps namely Emmet Doran and Michael O’Brien. Both might even face each other in the Last 16 if they win their respective matches against Kilbeggan’s Tom Crowe and Collinstown’s Nick Sheldrick.

Returning to St Patricks and they have another two players amongst the field, Michael Molloy will take on Darren Creevy from Lough Owel in the First Round while Mark Kirwan Jnr will play Jimmy Burke of Navan in the last of the First Round encounters. 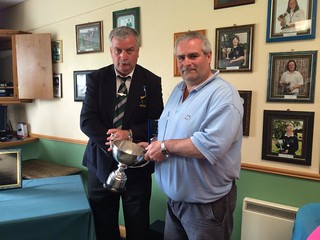 UNLIKE their Senior & Junior counterparts, the Intermediates have the comfort of knowing that all the action they will play over the course of Saturday and Sunday will be solely in Bellewstown and there is an interesting challenge for the only player from the club amongst the field. Patrick Mallon find himself taking on last year’s winner of the Junior competition in Anthony Ryan of McDonagh in a very appetising First Round encounter. We are guaranteed a new winner this year to succeed Martin Carter of Collinstown and if there is to be a Westmeath winner again this year it will have to come from either Lough Owel or Rochfortbridge. John Sweeney takes on Tullamore’s Darren O’Connor while Declan Hogan takes on Mark Donnelly of McBride.

Donnelly could face his club-mate Owen Campbell in the Last 16 should Campbell get the better of Lucan’s Jack King in the First Round. Christopher Murray is the other McBride representative in the grade as he faces Rochfortbridge’s Mark Kelly but another Louth club Seapoint will be interested in the bottom half of the draw. Its three representatives are all there with a potential for both Last 16 and Quarter-Final match-ups amongst their trio. Should Declan Matthews defeat McDonagh’s Paddy Phillips and Paul Cooney defeat Gaeil Colmcille’s Barry Nelis they will meet in Last 16 while Gerry Breen Snr could be a potential Quarter-Final should he come through his first two matches. Inniskeen duo Kevin McGuinness Snr and Michael Vaughan will want to make it an all Last 16 tie amongst the Monaghan club however as McGuinness faces Breen in the First Round while Vaughan plays Navan’s Anthony Gibney.

Two interesting names to look out for in this grade are two of the National O-55 Strokeplay winners from last September in Old County. The Intermediate winner Anthony Carroll from Erins Isle takes on Tullamore’s Jamie Hogan in the First Round while Ryston’s Aidan Whelan takes (Junior winner in Old County) takes on Albert Mithen of Loughlinstown in his First Round match. That particular quadrant of the draw is interesting as if Whelan comes out on top he could play a former St Patricks club-mate in Richard Grannell in the Last 16 while if Mithen wins he could find himself facing a Loughlinstown club-mate in the Last 16 should Richard Harkin get the better of Grannell in their encounter.

Dayle Donohoe and Kevin Doyle also represent the Enniscorthy club in this grade, the former playing Castletown’s Gerry Thompson in the First Round while the latter plays Michael Kehoe from fellow C/K/W club Gowran in his match. 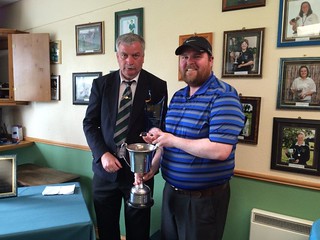 MUCH like the Juniors there is no real home advantage on Saturday for any of the competitors in Ringcommons but defending champion from last year in St Bridgets, John Ross Crangle of Loughlinstown, finds himself with an interesting trip down memory lane. He faces the player he beat in the 2012 Final to start his undefeated run in the competition, Dutch native Rene Jan Bloem of Collinstown, in the First Round. Crangle is looking for a fourth consecutive Leinster title (and fifth in total) having defeated Jim Judge Jnr of Erins Isle in last year’s decider.

Judge is not involved this weekend but two of his Erins Isle club-mates are in Paul Nolan and Patrick Noonan. Nolan takes on St Patrick’s Graham Donoghue in the First Round while Noonan plays Keith Smyth of McBride. One of last year’s beaten semi-finalists in Gary Healy of Loughlinstown is in action this weekend as he faces Niall Winters Jnr from Trim as they are two other players from the Loughlinstown club taking part this weekend, Patrick Kelly who faces a sticky prospect in Cement’s Sean Goggin while Eoin Mithen takes on Lucan’s Keith Redmond in an all Dublin affair. In terms of previous winners, Derek Courtney of St Bridgets faces Gary Middleton of Collinstown in the First Round while William Buckley Jnr of Erry takes on Irish Open holder Eamon Gibney in what should be an interesting encounter.

Bellewstown’s Peter Reilly is the only player that could potentially have home advantage on Sunday but he needs to make the semi-finals in order for that to happen but he faces a tough task in trying to make that happen, Joe McGrath Jnr of Erry is his opponent in the First Round while the winner of that will take on the winner of an interesting match-up between Anthony Malone of Lucan and John Browne of Collinstown in the Last 16. The meeting of Stephen Murray of Old County and Darren Keogh of Ryston will get matters underway in the grade with Dean Grannell (St Patricks) vs. Ian Donnelly (Cement) and Frank Ryan (Athgarvan) vs. Michael Buckley (Collinstown) the other matches of note in the top half. The bottom half of the draw also sees matches between Cement’s George Beardsley and Glenville’s Joseph Joyce, Barry Thornton (McBride) vs. Ian Dillon (St Bridgets) along with Kevin Thompson of Cloghogue taking on Aengus Coughlan from Erry.

When we do reach the semi-finals it will create an interesting dynamic as we find out if the players who came through Ringcommons so well can be as effective when they cross the county bounds into Meath and Bellewstown on the Sunday when the title will be decided.

Tomorrow: We look ahead to the Munster Matchplay Championships in Tipperary.