IN the first of a three part review of the 2016 season, John Manning takes a look at the significance behind this year’s World Cup win, the staging of the Irish Open in Rocklodge along with our U-16 events in the past year.

EAMON Gibney (Castletown) captained Ireland to 2016 World Cup success. In so doing, Eamon became the eleventh different individual to win World Cup honours. Ireland clinched the World Cup for the third successive time and is now the most successful team in World Cup history. John Walsh (Collins) and John Ross Crangle (Loughlinstown) are the third and fourth players to win two World Cup winners medals (Ray Murphy and Marc Lloret are the others). Xixerella, Andorra is the second course (after Chia, Sardinia) to host both the European Team championship and the World Cup. 2016 represented the first time Ireland has played Catalonia in the World Cup final. The sides have clashed four times in the European Team championship deciders. John Ross Crangle’s 45 in Andorra equalled the low first 18 in the five World Cup Strokeplay qualifying tournaments. Ireland’s 3-2 final victory over the Catalans equals the tightest ever final victory margin. The Catalans themselves defeated the Dutch by 3-2 in 2004.

Frank Dineen (St. Annes) polished off his third round with six birdies to win a second Irish Open title on 135 at Rocklodge, having previously triumphed at R.G.S.C. in 2010. Frank finished just a shot ahead of Deerpark’s Damien Fleming, who now boasts two wins, a second place and a fifth slot in the five Irish Opens since 2009. After her 163 at Rocklodge, Breda Lonergan was the first player to ever win the Irish Ladies Open and the Irish Ladies Strokeplay in the same year. Having won the British Open at Dagenham, Mary Murray finished in the top two for the second successive international open when she was runner-up to Breda Lonergan at Rocklodge. With a score of 151, European Senior Strokeplay champion Pacelli Darcy (Bruff) won the Over 55s category at an international open for the fifth time just ahead of Anthony Malone and Sean Minogue.

2016 was yet another phenomenal year in the extraordinary Pitch and Putt career of Geraldine Ward. The Portmarnock legend racked up her tenth National Matchplay championship success with an 8&6 final victory over Eleanor Walsh (Fermoy) at Seapoint.

Seapoint has hosted the National Ladies Matchplay on four occasions. That equals the venue most often used for the championship along with Ierne and Hillview. Ger has been in the Matchplay final every time the event has been played in Seapoint, winning twice. Her 32 year (1984-2016) gap between her first and most recent win in the Matchplay eclipsed the record previously held by Margaret Hogan (1980-2011). 1988 winner Eleanor Walsh (2012, 2016) became the 12th multiple losing finalist in National Ladies Matchplay history. Only two of those 12 have failed to win the title at least once. Ger Ward has now contested 20 National Matchplay semi-finals in which she has a win percentage of 70%. Chrissie Byrne also boasts a 70% winning percentage in her ten semi-finals. 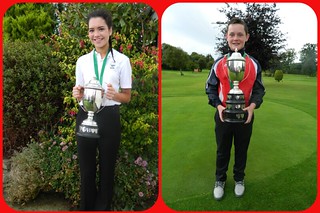 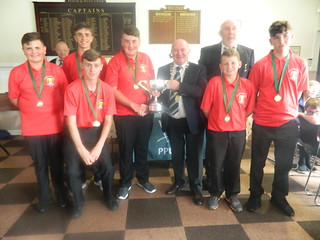 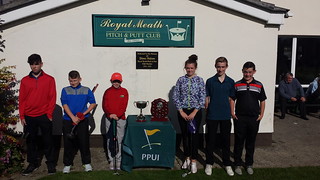 Tomorrow: The Year in Strokeplay