75 Juveniles are entered into Saturday’s National U-16 Strokeplay Championships in Tipperary Hills. The Tipperary Town course hosted last year’s Munster equivalent giving the players from the Southern Province who were involved last year some knowledge of what they will face around the tricky Hills. Communications & Press Officer Jason O’Connor takes a look at proceedings in advance of the battle for the Boys & Girls titles. 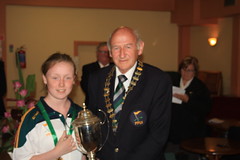 Five players will look to succeed Tullamore’s Amy Galvin as the winner for 2015. Lucan’s Aoife Mahon enters as Leinster Champion from the recent event in Portmarnock with club-mate Sarah Mahon the other Leinster entry. There was no Munster competition this year but there are three entries from the host province for the National event namely Ballinlough duo Lucy and Rebecca Aherne along with Lakeside’s Sive Shelley. Sive was second in the Girls Competition played here in Munster last year. 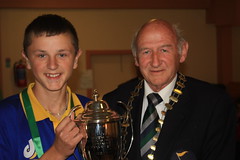 Like the Girls event there will be a new winner to succeed Raffeen Creek’s Charlie Morrissey who was victorious in Navan last year. Looking at possible contenders, firstly from Munster, St Annes’ Ryan Towler will enter with confidence after winning the Munster Boys 14-15 Strokeplay in Rocklodge last Saturday. Towler has also both won and lost the Munster Matchplay Final in the past 12 months although Douglas’ Conor Irwin will also feel confident about his chances having won the Munster Boys 14-15 title here last year. Conor was only two shots behind Ryan in the defence of his title last Saturday and will be anxious to go one better this weekend.

Raffeen Creek’s David Howard missed out on third last year due to countback and he will also be anxious to improve on that this Saturday. The winner of the 10-13 prize from Rocklodge last week, Iain Aherne of Ballinlough is also entered this weekend alongside the two players who were second and third to him in the form of St Annes’ Cian Murphy and St Stephens’ Glenn Towler. From Leinster meanwhile, Castletown’s Evan Carry is likely to carry a lot of the expectation having won the province’s Matchplay Championship in Ratoath and also winning the 10-13 grade in the Strokeplay in Portmarnock two weeks ago. He missed out on a third place overall in Navan last year on countback before winning the lower age prize (10-13) with his final score.

Portmarnock’s Ciaran Cregan, who was runner-up to Charlie Morrissey in Navan last year returns with his club-mate Ciaran Lynch from Portmarnock entering as Leinster Boys 14-15 Strokeplay Champion from two weeks ago. Another Dubliner Longmeadows’ Craig Hennessy was second to Lynch in Leinster with Navan’s Liam Carroll coming third in that age group on countback from last year’s Leinster Champion in that age group, Ross O’Reilly of Old County. The player who was second to Evan Carry in the 10-13 grade, Lennon Blake of Longmeadows tees off alongside Dylan O’Connell from the host club Tipperary Hills in the first pairing.

The host club have 10 entries for Saturday with Anthony Harding, Cormac Buckley, Adam Dunne, Dion O’Brien, Scott O’Dwyer, Ronan Finnan, Shane Ryan, Dara Swords and Daniel Ryan joining the aforementioned O’Connell in representing Tipperary Hills on the day. Larkspur Park’s Adam Buckley was the third place finisher in the Boys 10-13 grade here last year and was also a Munster Matchplay semi-finalist in his home course earlier on this month. The winner of that 10-13 grade here last year, Douglas’s Eoin Keating is also entered for this Saturday.

All competitors will play a straight 36 holes with a nine hole playoff to taken place in the event of their being a tie for the overall winner in both grades at the end of the initial 36 holes.