PORTMARNOCK plays host to the Leinster U-16 Championships this weekend. Communications & Press Officer Jason O’Connor takes a look ahead to the action over the next two days.

As is traditionally the case in Leinster, the Inter-County Championships are first up on Saturday with Dublin looking for a third consecutive title on home turf. They have three of last year’s winning side in the 2015 side, namely Ross O’Reilly and the two Ciaran’s, Lynch and Gregan, with Conor O’Reilly, Lennon Blake and Craig Hennessy the three new members in the capital’s ranks this year. Meath also have three of last year’s team in their line-up this time around namely Evan Carry, Ryan Crocock and Jack Dardis with Seanie Bellew, Liam Carroll and Christopher Woods the three new faces in the Royal County line-up.

Offaly, Louth and Westmeath are the other three counties entered with Offaly also containing three of last year’s side. Mark Newman, Daniel Fox and Kieran Doyle all played on the 2014 side that finished third behind Meath in McBride last year with two Jack’s, Bryant and Reynolds, along with Conor Doyle playing for the Faithful County this year in Portmarnock. Westmeath make a welcome return to proceedings and Nathan and Brian Malone along with Jack Buckley, Padraig Carton, Nicholas Isdell and Mark Moran the others to wear the Maroon colours on Saturday.

The format will be an 18 hole Scotch Foursomes round followed by an 18 hole Singles round. 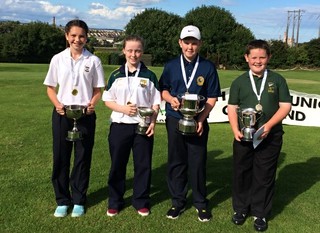 40 players have entered for the three different grades (sponsored by Eamon Birchall and Brophy Brothers Builders) on Sunday. Three will contest the Girls Championship, Lucan’s Aoife Mahon looking for another title having won the 10-13 grade last year in McBride with club-mate Sarah Mahon and Kilbeggan’s Sarah Cullen her fellow competitors on the day.

The Boys 10-13 grade features the recent Leinster Matchplay Champion and current holder of this title, Castletown’s Evan Carry and he tees-off in the first three-ball alongside Longmeadows’ Lennon Blake and Seapoint’s Dylan Keating. Keating is one of eight entries from the Louth club in the grade with Conor and Eoin Brennan, Conor and Niall McGinnity, Eoin and Luke Murphy along with Josh Murtagh all entered. Kyle Thornton of Cement is the other player from the county entered. Making up the rest of the 17 entries for this section include Kilbeggan duo Padraig Carton and Jack Mullins, Bellewstown’s Lucas McKeen (runner-up to Carry last year) and Longmeadows’ Anthony Devoy.

The Boys 14-15 grade also features the two players who finished first and second last year in McBride with Ross O’Reilly of Old County having a three shot winning margin over fellow Dubliner Ciaran Gregan. Gregan will feel confident about making amends this year with proceedings taking place on his home course with Ciaran Lynch the other player from the host club entered for Sunday. Longmeadows and Ratoath have the biggest single entry of any club with four each. Ratoath are represented by Adam Bermingham, Evan Donnelly, John Foley and Sean Yourell with Conor O’Reilly, Craig Hennessy, Jamie Lang and Derek Brady the other entries from the Dublin club. Cement have three entries in the form of Christopher Behan, James Carroll and Ciaran Reilly. There are a further four entries from Meath with Castletown’s Jack Sheerin, Navan’s Liam Carroll, Skyrne’s Jack Dardis and Bellewstown’s Christopher Woods all entered.

We wish all competitors in the various events in Portmarnock the very best of luck this weekend. Updates will be available on proceedings throughout the course of the weekend.